Hey folks, Harry here - the APOCALYPSE NOW dvd is an awesome DVD. For anyone that loves the film - it is an absolute essential - having both versions - and tons of extras. If you want to know why the HEART OF DARKNESS documentary isn't on the dvd - well, the maestro answers that himself, below. Here ya go - lots of good news - especially about a film called YOUTH WITHOUT YOUTH which he's currently editing. Here ya go... 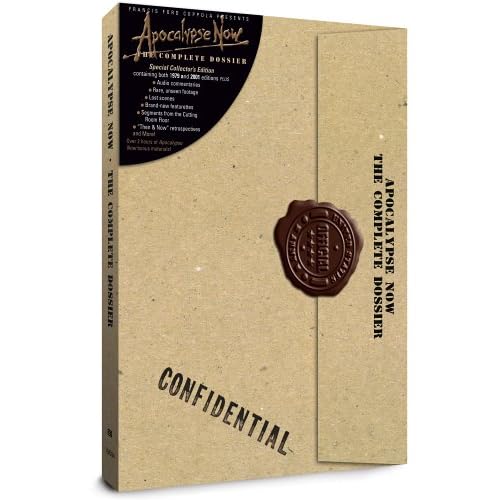 I've contributed some prior posts to your site.

I attended a Q & A with Francis Ford Coppola at the DGA Tuesday night. I'm surprised that no report has yet showed up on your site, as there were tons of USC and UCLA film students in attendance. Anyway, here's a report if you want one ( please forgive the typos):

The evening started out with approximately 50 minutes of clips from the new Apocalypse Now DVD. Then Coppola entered -- it was quite a thrill to be in the same room with the man responsible for Apocalypse Now and The Godfather. I'm not sure how long the Q & A lasted, but it seemed to go on a for at least 90 minutes. Coppola had a very "mentorly/fatherly" air, and was very gracious in answering students' questions. He was very candid with his answers, and there did not seem to be any questions that were "off limits."

Here are some of the highlights:

Coppola's new film Youth Without Youth is currently being edited by his longtime collaborator Walter Murch. I don't believe Coppola mentioned a release date. He said that the current cut of the movie was around 2 hours and 45 minutes, and gave the impression that it was going to be shortened. He alluded to some other film projects in the works, which he described as "personal films."

He mentioned the fact that he hasn't directed a movie in ten years. He said that he has been writing a screenplay called Megalopolis, which has not lived up to his expectations.

When asked about how he felt about the move away from film to digital cinematography, he responded that "you have to use the weapons that are on hand." He said that he did not believe anyone would be shooting on film in four years.

The new DVD release of Apocalypse Now has been criticized by completists for not including the "Heart of Darkness" documentary. Coppola said that he didn't want to include the documentary because he considered it a separate film, not a "supplement." He also said that another company(Showtime) produced "Hearts of Darkness," and there would have been complicated rights issues involved in including it. He also mentioned that not everything in the documentary was accurate or fair to him; some of the footage was taken out of context. He wished that he could do a commentary track on the documentary to correct the misimpressions.

Regarding his opinion on the neverending conflict in the Middle East -- he mentioned something about how he wanted to gather a group of Palestinean and Israeli artists, and have them create art together, while discussing ways of solving their problems -- then film the experience and show it in cinemas across the world. (It was something like that ... it sounded a lot more eloquent when Coppola described it.) I got the impression that this was more of an idea rather than a firm project that he had in mind.

On firing Harvey Keitel and re-casting Martin Sheen as Willard in Apocalypse-- he said that it was one of the few times in his career that he had to fire an actor, and it was a very difficult thing to do. He said that Keitel was more from the New York school of acting and drew too much attention to himself -- which he felt was inappropriate for the character, who he viewed as being more passive.

He was quite vocal in his dislike for The Godfather video game.

The water buffalo that was killed at the end of Apocalypse was already going to be sacrificed. Coppola said that he just filmed the sacrifice -- it was not killed specifically for the film; it was going to be killed anyway. However, he did have another water buffalo on hand in case they needed to do another take.

He thinks studios and filmmakers put too much emphasis pursuing blockbusters and franchises, and urged filmmakers to pursue personal films.

I was also surprised to learn that Coppola actually owned Apocalypse Now -- meaning, I assume, that he owns the actual film negative and all rights. He said that Paramount holds the film in trust for him, but he is actually owner. He mentioned that he also owns The Conversation, and that Sofia Coppola owns Lost in Translation.

Anyway, if you use this, please sign me as Marty McSkywalker.