HBO's THE WIRE Returns In A Month!! Learn What Awaits McNulty and Omar!!

Bunny’s back!! But no Beadie Russell!!

And it looks like the great novelist-screenwriter Richard Price (“Sea of Love,” “Mad Dog and Glory,” “Kiss of Death,” “Clockers,” “Ransom,” “Shaft,” “Freedomland”) is back to help things along.

Season four of THE WIRE centers on the lives of four young boys as they traverse adolescence in the drug-saturated streets of West Baltimore. The new episodes of the series examine their world through the theme of education, asking viewers to consider the world that awaits these boys, and to consider further the American commitment to equal opportunity.

"The American obsession with police procedural and crime drama usually only allows for villains - in large part, black and brown - who exist as foils, to be pursued and destroyed by cop heroes," says series creator and executive producer David Simon. "We're addressing ourselves to where the 'villains' actually come from, and whether we have any right to regard them as somehow less human than the rest of us."

This season of THE WIRE is based in large part on the experiences of writer and producer Edward Burns, who taught social studies for seven years in the Baltimore school system after serving 20 years as a city police detective.

"If anything," says Burns, "our depiction of an inner-city school system, its problems and its unwillingness to fully address those problems, is a very generous one."

The stories of Michael, Namond, DuQuan and Randy take place against the rise of a new narcotics empire in West Baltimore - replacing the fallen Barksdale organization - and the resulting struggle by Baltimore detectives to mount an investigation against this new power.

The writing staff of THE WIRE includes David Simon, who penned two books of narrative nonfiction, "Homicide: A Year on the Killing Streets," which inspired the hit series "Homicide: Life on the Street," and "The Corner: A Year in the Life of an Inner-City Neighborhood," which inspired the Emmy(r)-winning HBO miniseries "The Corner"; Ed Burns, a former Baltimore police detective and Baltimore city public school teacher who coauthored "The Corner" with Simon; Eric Overmeyer, a noted playwright ("On the Verge") and veteran TV writer for such dramas as "St. Elsewhere" and "Homicide: Life on the Street"; Bill Zorzi, a former political writer and editor for the Baltimore Sun; and David Mills, who was one of the writers on "The Corner," as well as a writer for "NYPD Blue" and "Homicide: Life on the Street." Also writing for the series this season are novelists Dennis Lehane ("Shutter Island," "Mystic River"), George Pelecanos ("Hard Revolution," "Right as Rain") and Richard Price ("Clockers," "Samaritan"), and playwright Kia Corthron ("Breath, Boom").

Beginning Sept. 4 with the season premiere, each weekly episode of THE WIRE will be available on HBO On Demand the Monday prior to its Sunday debut on the main HBO channel. The HBO On Demand debuts will continue for the entire 13-episode season.

Episode #40: "Home Room"
Debut date: SUNDAY, SEPT. 24 (10:00-11:00 p.m.)
Other HBO playdates: Sept. 26 (11:30 p.m.), 27 (midnight), 29 (10:00 p.m.) and 30 (11:15 p.m.)
HBO2 playdate: Sept. 25 (9:00 p.m.)
With his lead dwindling in the polls, Royce resorts to extreme measures to stall Carcetti's momentum. At Bodie's corner, Michael proves adept as a runner, with both Bodie and Marlo taking notice. A re-up bodega is put under surveillance by Omar (Michael K. Williams) and Greggs (Sonja Sohn), for different reasons. Rawls (John Doman) replaces Asher with a "company man," Charles Marimow (Boris McGiver), who pushes a new agenda on the detail, to Freamon and Greggs' dismay. A domesticated McNulty invites Bunk (Wendell Pierce) over for dinner, which ends with the two remembering the good old days at a familiar spot. Randy enjoys a productive first day of school, though Prez, the new teacher, isn't so fortunate. Herc reaps an unexpected benefit, courtesy of the mayor. Colvin (Robert Wisdom) contemplates trading his new job in the private sector for one that gets him back on the streets.
Teleplay by Richard Price; story by Ed Burns & Richard Price; directed by Seith Mann.

THE WIRE's third season, which concluded in Dec. 2004, sparked critical raves. The New York Times called it "one of the smartest, most ambitious shows on television..." Entertainment Weekly said, "Grade: A...TV's richest, most satisfying experience," while Daily Variety hailed the series as "brilliant...one of TV's premier hours...meticulously written, superbly acted...engrossing."

HBO Video will release the third season of THE WIRE on DVD Aug. 8. 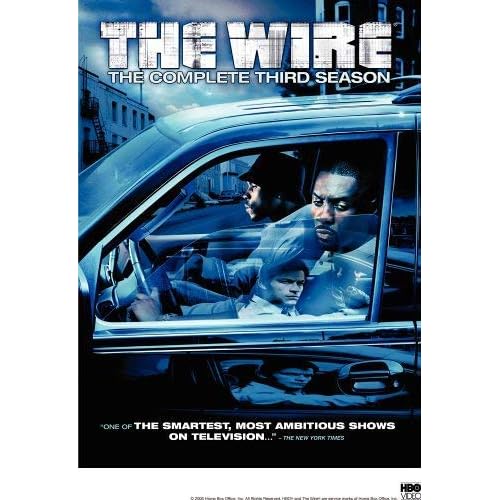