SPIDER-MAN 3 fast food tie-ins have already leaked! Which suits you? Red or Black?

Ahoy, squirts! Quint here with a couple super blurry spy pics of a couple Burger King scratch-game tie-ins for next summer's gigantor SPIDER-MAN 3. This is really for all those people who insist up and down in the talkbacks that Sony is somehow pulling a giant trick and there will be no Black Suit in the film... despite the official teaser poster being the black suit and those pics of Goth Peter Parker from the New York shooting... with him pulling back his shirt to reveal the Black Suit underneath.

I don't know how you can get around a movie tie-in scratch-off game that makes you decide between Black or Red with a half-black, half-red Spidey face above it. It looks just like the REVENGE OF THE SITH Light Side or Dark Side scratcher from Burger King.

Anyway, here are the fuzzy pics for all us Spidey freaks who can't get enough of the tiny tidbits from the third film seeping out! Enjoy!!!

Looks like we can look forward to some Spider-Man toys and promotions with our Whoppers next summer.

In the tradition of reporting any slightest tidbit of news related to our most anticipated movies, I submit to you some news on Spidey 3 Cross-Promotions. I belong to one of those survey sites, and was asked to give some opinions on concepts for a promotion at Burger King. It definitely ties in with Spider-Man 3. The examples shown were for a scratch-off game. One concept called it "Use Your Extreme Spidey Sense" while the other (which I preferred) said "Which Spidey Suits You?" and had a split shot of the red costume vs the black one. I've included some pics of the proposed game pieces, but I must apologize for the quality - the pics could not be copied or saved, so I had to just try snapping digital pictures of the screen

So anyway, looks like Burger King is the place to be for Spidey fans next year 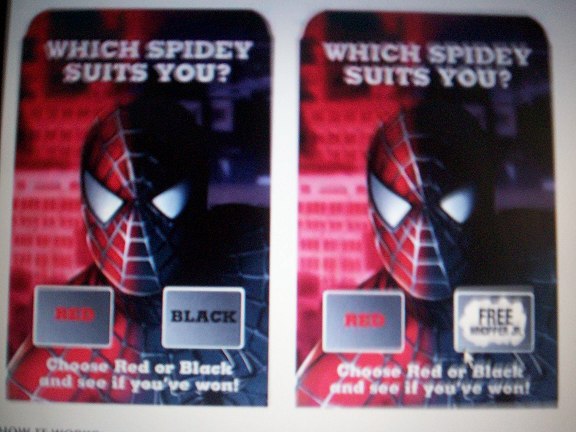 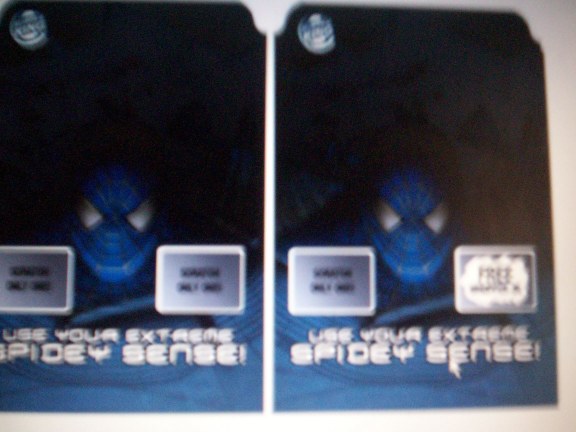