Ahoy, squirts! Quint here. While I was packing for my two-month long excursion to New Zealand, my seaman sense started tingling. We've been hit with an inordinate amount of fake pictures when it comes to SPIDER-MAN 3, but when I saw these pics in the mailbox (courtesy of "Saint of Sand") they immediately matched with the word I've been getting about what's been shooting on the New York City streets.

Word was that Tobey Maguire was dressed all in black and stepping all Tony Manero/SATURDAY NIGHT FEVER-ish down the street. Here are the pics I was sent that feature the first look at Topher Grace as Eddie Brock (clearly Eddie Brock and you'll see why in a second) and Tobey revealing a little black-suit for the whistling, cat-calling fanboys out there. 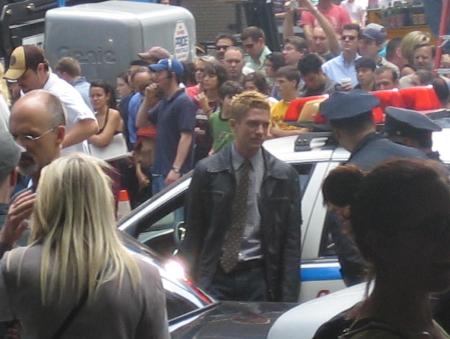 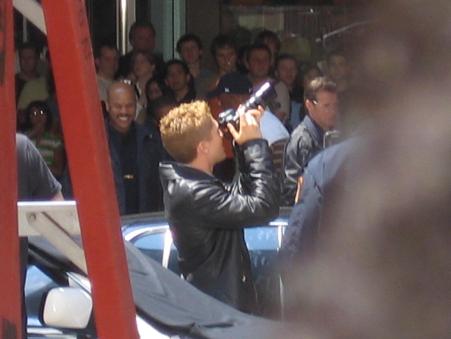 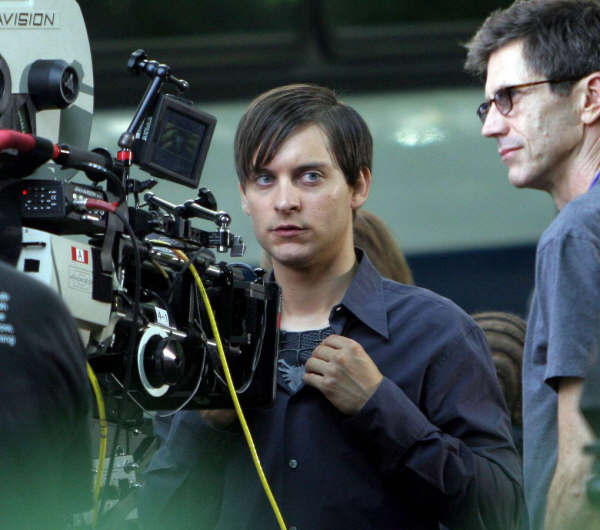 So, does this mean the symbiote doesn't form Peter's clothes? Is it only ever a suit? Or is he just wearing the equivalent of the one in the books that the Black Cat made for him? What do you folks think of Topher? I really like him as an actor. Not happy with him as Venom. He's going to have to go a long, long way to turn me around, but if any director can spin me it'd be Sam Raimi. They got Molina dead on right as Doc Ock, Willem Dafoe dean on right as Green Goblin and Thomas Hayden Church dead on right as Sandman (so it seems). This is the only villain casting I'm not convinced of. Thoughts?

UPDATED WITH MORE PICS, including Gwen and Cromwell as Capt. Stacy!!!

This came with the bigger pics below:

I'm sure you've already been flooded with some pics from the shooting of Spiderman 3 this weekend in NYC. No matter - I Iive just around the corner from 55th & 6th Ave where most of the action is taking place ~ and I've been reading this site for at least 5 years - so it's time to give back :)

The shots speak for themselves - it was hard to get a good angle w/ most of the crew & equipment trucks blocking the plaza - but did get clean shots of Spiderman in custom, Topher, Cromwell & B. Howard. Basic scene context is it looks like there's a massive battle on a top floor & which ends in debris on the plaza. Gwen is running to her dad & spidey does some pretty cool wire work after talking to pre-venom Brock. They've got some pretty intense wires running between the skyscrapers on the block & a ton of extras that police are protecting on the street.... 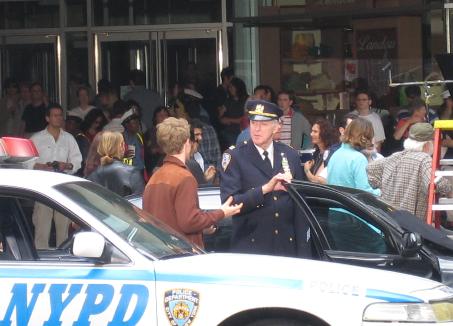 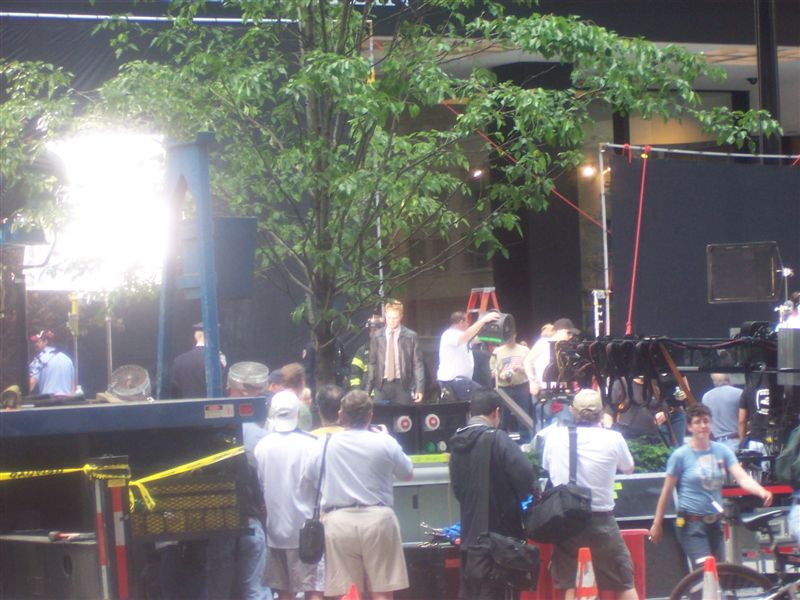 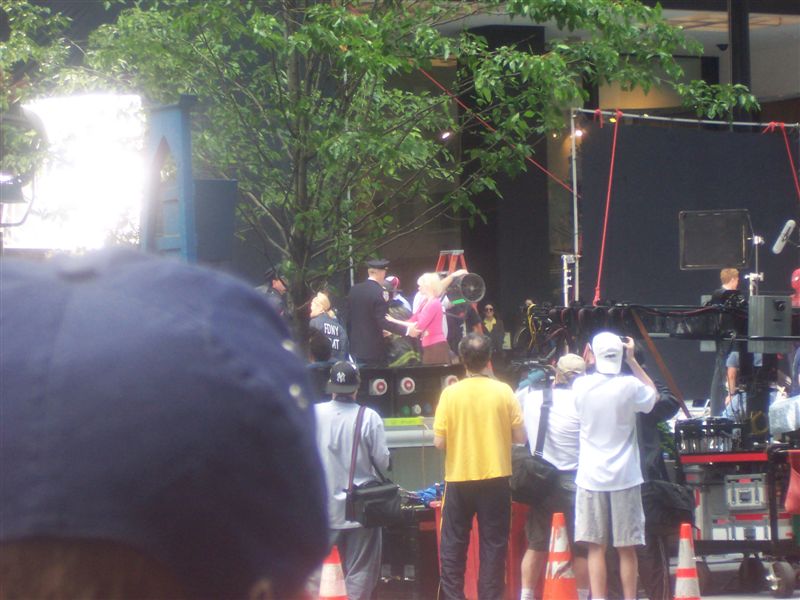 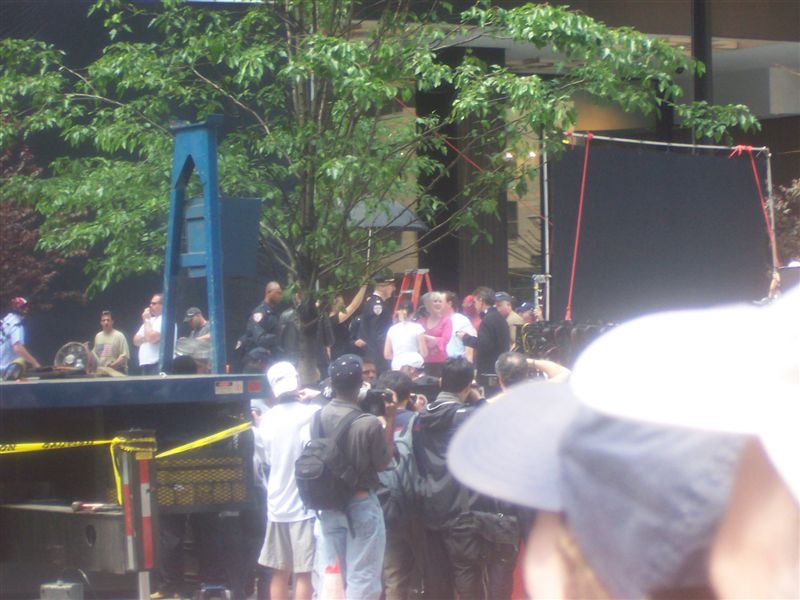 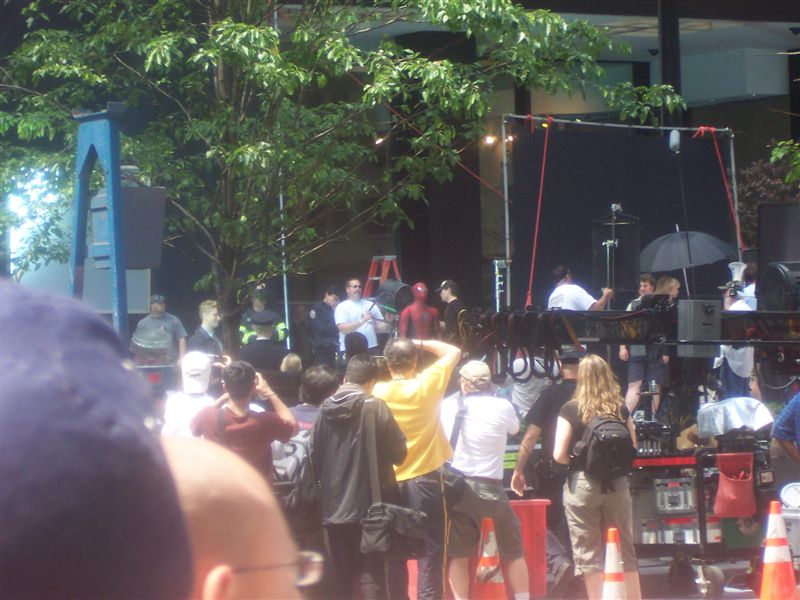