“His music has a conquering ostinato frequent in the works of Badelt, but here its power digresses from oppressive rhythms to expose the rich harmonies and the memorable melodic line of this twilit soldier.”

I’m too tired to be insecure at the moment, but I’m sure I’ll be terribly intimidated by such intellect when I wake up in the morning. 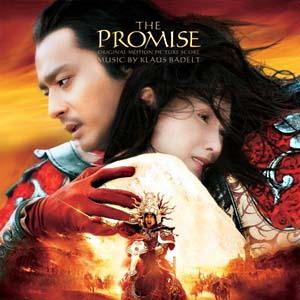 ScoreKeeper back in the saddle with a review of the score for Chen Kaige’s latest film, THE PROMISE (WUJI), composed by Klaus Badelt.

Chen Kaige is one of China’s most beloved directors, most well known in the West for his film FAREWELL MY CONCUBINE (1993). Kaige made an interesting and possibly risky selection when he hired Klaus Badelt to compose the score for what is being touted as the most expensive Chinese movie ever made. After the tidal wave of success it has already received in China and the optimism the producers have for its release in America, the selection of Badelt appears not as hazardous as one might think.

Here is a rundown of the tracks as is presented on the CD (Superb Records SPB-2641) which was released May 2nd:

I’ll be the first to admit that as the days wear on I find myself becoming more cynical and less enthusiastic about the state of film scoring and its future. It’s not because I want to be this way, but much more because my passion for it won’t tolerate mediocrity. Whether it is really headed that way or I’m just becoming a crotchety old fart, I’m not sure, but there does appear to be less film music out there that gets me as excited as scores past.

You can then imagine how surprised I am that it appears I’ll be posting my second glowing review in as many writings. THE PROMISE, or WUJI, as it’s known in China, by Klaus Badelt is easily his best work to date. The young and still up-and-coming composer from Germany is known in America for his scores for THE TIME MACHINE (2002), THE RECRUIT (2003), PIRATES OF THE CARIBBEAN: THE CURSE OF THE BLACK PEARL (2003), CATWOMAN (2004), ULTRAVIOLET (2006) and his latest to hit the screen, POSEIDON (2006). Although THE PROMISE is just now hitting American theaters (May 5, 2006), the film was released in China in 2005. Fans of Asian cinema may have already acquired it from DVD vendors overseas.

The CD opens up with one of the most spectacular pieces of music in the entire film. “Freedom of the Wa” is actually the cue accompanying the closing credits. This is a fitting piece to open the disc. The first time I heard it I was instantly entranced by the hypnotically gorgeous Chinese vocal line which Klaus adapted from an ancient folk tune. The lone appearance of this vocal melody at the end of the film creates a poignant epilogue perfectly capping the conclusion of this epic story.

The second piece, “Wuji - Main Theme,” is a simple iteration of the main theme which Klaus weaves throughout the film. It doesn’t seem to be as powerful or prevalent throughout the film as the “Love Theme” which follows, but its statement here is built of a purity and delicacy that benefits the overall tone of the film. Klaus uses Chinese instruments very minimally here and throughout the score as if to simply acknowledge the culture in passing rather than force the culture into this global story. The “Love Theme” is one of the primary moving forces in the entire score. In a film about love, this dramatically soaring theme captures it exquisitely. This theme seems to garner more attention from the composer than even the Main Theme, as it is developed more extensively throughout the score.

The next four tracks feature themes representing the four main characters in the story. “Kunlun, the Slave” starts with a simple folk-like tune on the erhu that builds to a monumental climax just as Kunlun rises from the bonds of slavery toward his ultimate destiny. “Qingcheng, the Princess” is a delicate piece composed primarily for strings. Klaus leaves the Chinese instruments absent here, focusing more on the universal qualities of beauty, grace, and love. “Guangming, the General” characterizes this larger-than-life figure beautifully in the film. Guangming is ancient China’s greatest military warrior and most loyal servant of the king. His music has a conquering ostinato frequent in the works of Badelt, but here its power digresses from oppressive rhythms to expose the rich harmonies and the memorable melodic line of this twilit soldier. The next track, “Wuhuan, the Duke,” is a sad and tragic piece encapsulating the villain Wuhuan. He is not completely represented through music as the tyrant or murderous thug he is visually exposed to be in the film. Rather his music suggests an underlying tragedy that strangely builds sympathy with the audience. It is almost misunderstood until his fate is revealed at the end of the film.

After the four main character themes and Love Theme have been introduced it’s time for Badelt to start developing them. In “Princess Kite” an absolutely gorgeous violin solo takes the Love Theme and builds it to even newer heights as Kunlun races with the Princess Qingcheng soaring above him like a kite. This begins to demonstrate the extremely talented dramatic composing that Badelt is capable of. In “The Promise” the solo violin returns again this time singing fragments of the Main Theme and also recapping fragments of the Love Theme. Some of the Chinese instruments return, but again, not heavy-handed. His usage of traditional instruments is kept to a subtle minimum, even using them in non-traditional ways.

“Snow Country” highlights the voice once again as it creates shading in the music adding depth to this climactic scene. This music is like a roller-coaster sailing from extreme levels of despair and tragedy to time-stopping beauty and grace. Here we get a gorgeous duet between the Chinese erhu and the Western violin, revealing the painful and heart-wrenching history of the slave, Kunlun. They play pretty much in unison throughout the cue creating a wonderfully eerie yet slightly familiar sound that tugs at the heart-strings. This cue immediately segues into the conclusion of this segment of the film, “The Robe” where the tragedy climaxes to its zenith. In what is clearly one of the most powerfully dramatic moments in the entire movie, Badelt’s music and Kaige’s images bind together in perfect marriage.

“Save the King” is a nice transitionary piece further developing the Love Theme. Listen especially for the lone flute solo in the distance that introduces a powerful surge of dramatic music before giving way to an ethereal blend of an ethnic flute and plucked Chinese zither.

“Guiland, The Assassin” is a piece representing one of the supporting characters in the film. A strong duality in the music appropriately symbolizes the two sides of this tortured character. A beautiful soaring melody is intermittently interrupted by a powerful barrage of drums. Yet this simple, beautiful melody persists quietly and unnoticed, capturing the character precisely as he struggles throughout the film with his desire to do right, but falls short into temptation.

“Saving the Princess” begins with a quote of the Love Theme before quickly igniting into an explosive array of colorful action music. Badelt applies action music sparingly, careful not to ruin the fragile dramatic fabric painstakingly woven throughout the film. The bold, militaristic ostinato of the General returns coupled with refrains of the Main Theme. On “Feather Fight” a hauntingly gorgeous ethnic flute introduces the piece and proceeds cautiously, trying not to lean too heavily on traditional Chinese influences. Strings suddenly enter and assist the almost dying sound of the flute and lifts it up with refrains of the Main Theme.

“Waterfall” and “Stampede” echo some of the growing action sequences that has been dispersed throughout the film. This film is much more a dramatic love story and less an action film, so consequently, the few scenes that do find themselves scored with action music are usually quenched rather quickly with overriding themes of love or destiny.

In “Come Back” we hear a rather rousing climax of the Love Theme return. Although these themes are woven throughout the score rather liberally you don’t get a strong sense that there is a lot of repetition in this music. It is wonderfully crafted and developed enough to seem familiar yet refreshing. I doubt there is any occurrence of one of the major themes in this film that is stated in exactly the same musical context.

“Birdcage” is a rather intimate piece of music once again featuring the erhu representing the slave Kunlun. It is a quiet and somber cue befitting the moment. In this scene the Princess, trapped like a bird in a large cage, pleads with Kunlun to claim the Crimson Armor for himself, and rescue the General.

The finale on the CD, “Wuhuan’s Plan” features the most ambitious fusing of all the themes, instruments, and styles in the film. Clocking in at 10:20, this lengthy cue captures a large portion of the finale. We get thematic development, stanzas of heart-pounding action music, solos from traditional Chinese instruments as well as Western instruments, and a wonderfully paced coda to close the story.

THE PROMISE is modern dramatic scoring rooted in the traditions of old cinematic romance classics. In a way, this score reminds me a lot of James Horner’s BRAVEHEART (1995), which remains one my favorite dramatic scores from the 90’s. But it’s almost unfair to compare the two because I feel that Badelt’s score for THE PROMISE has so much more emblematic depth and developmental complexity to his music than Horner’s score did. Badelt keeps his score functioning on more than one level, creating multi-dimensional aural symbols that compliment Kaige’s style of storytelling beautifully.

Fans of Klaus Badelt will certainly welcome the exposure of this new musical versatility from the composer, especially in regards to dramatic scoring. During a time when many film scores are getting louder, faster, and more obnoxious, it is refreshing to hear an artist know how and when to refrain, letting a slower, more subtle subtext within the music be heard and subsequently felt. THE PROMISE greatly benefited from Badelt’s sensibilities and in return has given him a canvas worthy of his talent.


Be sure to check out ScoreKeeper’s interview with the composer of this score HERE!