Ahoy, squirts! Quint here with Monki's final day of coverage on E3. That isn't to say his reporting is over and done with. The boy got some one on one interviews that he'll be reporting on in the very near future. Monki has lots to talk about below, so I won't take up too much time, but I had to point out these bits of art from an unannounced STAR WARS game that totally has the geek in me drooling. Love that crashing Star Destroyer image... Too cool! Check out them images!!! 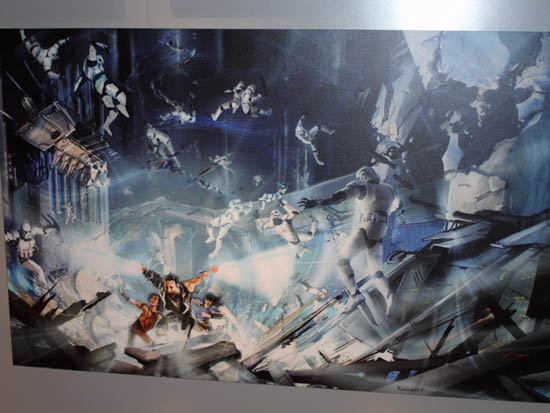 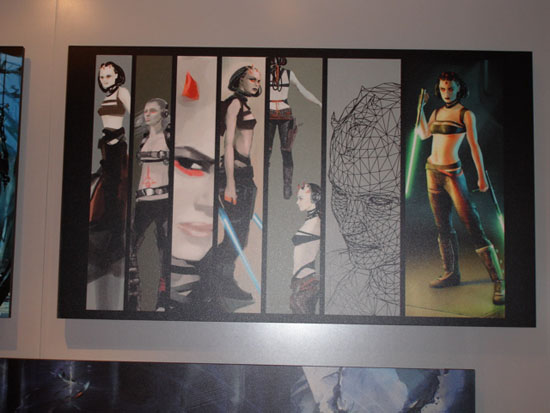 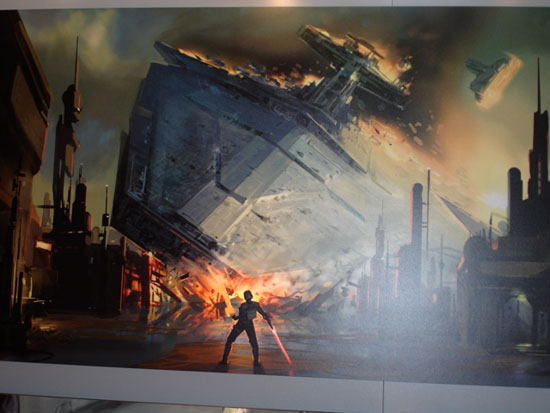 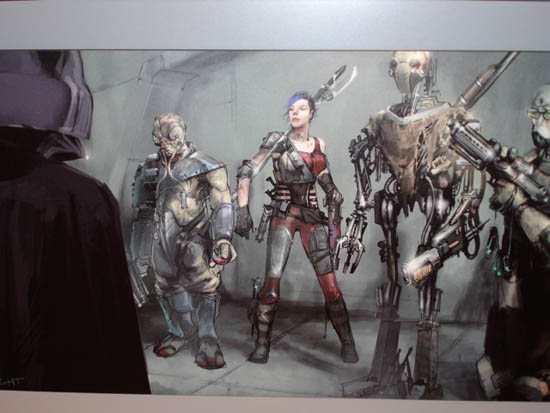 Badass, no? As always, feel free to drop us all a line at games@aintitcool.com with any thoughts on the column as it continues to grow. Without any further ado, here's Monki!

Hey there folks, Monki here with my last bit of coverage from the annual Electronic Entertainment Expo here in Los Angeles.  Today I had fewer interviews to get to and managed to make my way around the floor for a bit more hands-on with some games and a few surprises all-around. 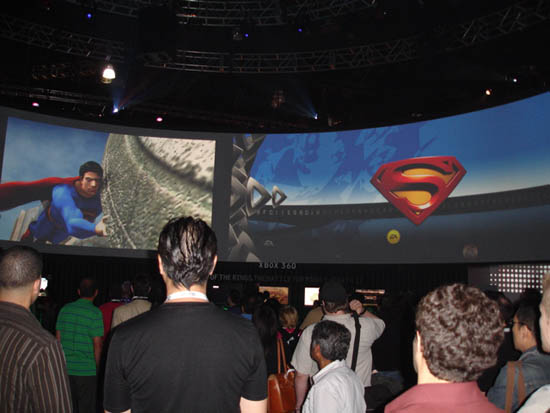 I kicked the day off with an interview with the guys who are developing Hoopworld for the XBox Live Arcade.  I’ll be posting the interview with the brothers sometime over the upcoming days, but it was a great way to kick off the morning, talking new games, old games, classic games and THE WIZARD.  Great guys all around.  From there I started wandering the floor playing catch-up.

I played a few more PS3 games that were spread about including the new Sonic game.  It looks really good and was pretty fun to play.  A very simple design gameplay-wise, but graphically impressive.  I also got to take a closer look at Warhawk, the game that was demoed during Sony’s press conference.  This title is better known as the only title that supports motion sensing at the moment. It looked pretty good but Sony had it pegged at 30% complete so I can only expect it to look even prettier by the time it is all said and done.

For the 360 I got to get some play in on Saint’s Row, the GTA-like game coming pretty soon to a store near you.  It was a lot of fun to play, very well designed and thought out.  The plot seemed pretty fun with lots of interesting characters.  The graphics are very colorful, they pop-out at you like a comic.  I will definitely be checking this one out when it hits store shelves.

One game that I got some time with that I was really looking forward to was Dead Rising.  This is Dawn of the Dead in a playable format.  You are a photojournalist who ends up inside of a shopping mall crawling with zombies.  It is your job to hack and smash the crap out of any non-alive moving creature around you.  Just about every item is useable in some fashion.  See that portable propane tank?  Pick it up and throw it into the middle of a group of zombies, then shoot at it with your pistol and send the zombie-gibs flying.  Blood flows freely in this game and I think it will do the genre justice when it comes out.  Only one minor detail that bugged me, the loading screens.  This game seems to pop-up a loading screen every 20 seconds or so.  Hopefully something can be done about that to turn this thing into a great game. 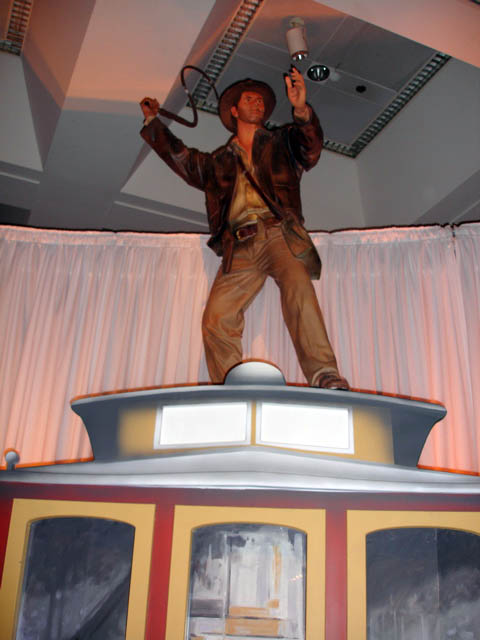 Towards the end of the day I made my way over to the LucasArts booth which had been appointment only up until today.  Inside I got to see some Indiana Jones demo stuff.  Damn.  This game looks good.  This new Indiana Jones game uses a new form of technology called Euphoria which gives every character a “brain” of sorts.  Not in the AI sense of brain, but more reaction skills and knowledge.  For example, if you knock an enemy off of a bridge, if that enemy tumbles off close enough to the bridge, he may try to grab on to it and hold on for dear life.  If you knock them off hard enough, they may still make the reach but miss and then cover their face for the fall.

This technology means no more repetitive animation sequences.  Every time you play as Indy, the enemies will react differently.  Really cool stuff here and a fun way to wrap up my E3 experience.

The biggest problem about covering an event like E3 is the sheer size of the thing.  We’ve tried to provide you with information about the whole event with only me covering the show floor.  One problem with this means in order to provide the most coverage, I had to move from place to place quickly and I couldn’t dwell on any one spot for too long.

I have to admit something here, I’m severely disappointed in myself.  Of all the time I had at E3, I did not play with a Wii.  No Wii jerking, no Wii shaking.  I did not fish with a Wii nor did I stab enemies with a Wii in my hand.  How saddening. 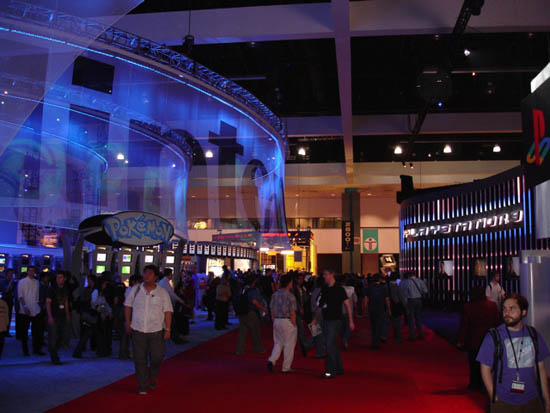 I really REALLY wanted to check this system out but the queue was well over two hours at all times for it.  I did hear a lot of happy impressions about it though.  Many people left the demo area with stupid grins on their faces after playing with their Wii.  Lucky bastards.  I did get to play the new Mario DS game though.  It was pretty fun, but I’m sure not as fun as playing with a Wii.

Okay, enough Wii jokes, for cereal.  On a serious side, I heard no disappointment whatsoever for the folks who got their hands on a trial, goodness all around.

Some highlights of the day include playing CONTRA!!! Sweeeeet.  The game is the classic ARCADE version of the game, so some of you old-school NESers will have to get used to the minor graphic changes, but it is there, the classic game.  Some other classics up for play were Frogger, Galaga and Defender.  Ultimate Mortal Kombat 3 was being played as well.  I kind of wish we would have seen MK2 instead as that is BY FAR the best of the MK series. 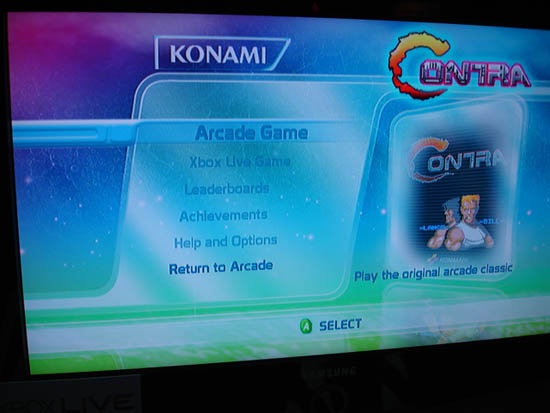 On a cooler film-note; I was sitting down, enjoying a healthy meal of Pepsi and nachos when Cresente (founder of Kotaku) rounds a corner and tells me and my buddy that “Spielberg is coming around the corner.”  I had just figured out who the hell this guy was telling me something when I looked up and lo-and-behold, Steven Spielberg walks in front of me surrounded by a posse of relatives and security.

Now let me tell you, there are like 4 people in the universe that I am completely star struck by, people that I wouldn’t know how to even begin to talk to them.  Spielberg is one of them.  I sat there drooling as he walked by.  Thankfully my head cleared in time for me to drop my nachos and cut off the posse around a corner and snap a picture of the bearded one himself.  Wow. 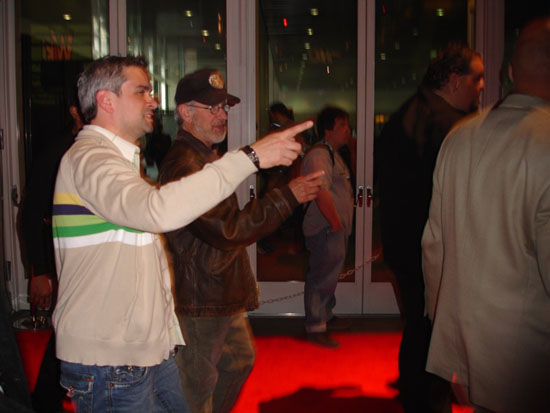 So, my first ever E3, AICN’s first ever E3.  I hope I did some justice in covering this gigantic festival.  I know next year will be a little bit easier as I’m sure that the crusty seaman Quint will be joining me, wandering the halls slack-jawed at the lovely ladies that the sea just does not provide.

Don’t think that just because E3 is over that the Games section is going to stop.  I talked with some very cool people at E3 about some pretty badass titles and I’m currently working some contacts on getting some incredibly cool content regarding some movie-based titles.  Big titles too.

So, until I’m back in Austin, back up the tree I go.  (You know, palm trees are much easier to climb.)

Send your praise or hatred to monki@aintitcoolmail.com.  I will dance if you put a coin in the box. 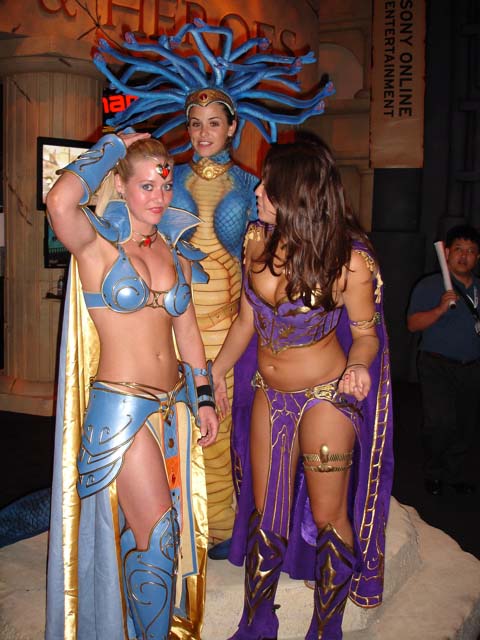