Hey folks, Harry here with the latest update on KING KONG that we've been sent. This came from SHOWEAST - where they unveiled the new trailer and some promo items. I have to say... I'm going through withdrawls waiting for that new trailer. I thought it was popping up on DOOM - but no. Gotta wait. ARGH!!!!! As for that 3 Hour news... Man - I hope that breaks down to 30 minutes pre-Skull Island, hour and a half Skull Island and an hour of New York. No matter what though, I think I'm most looking forward to the Weta - recreated Spider Pit footage on the 33 KONG dvd coming this next month! And - it is such a shame that they were forced to remove that last KONGISKING doc due to music and film image issues. After all that Peter's done for their DVD, you'd think they'd be a bit cool on that.

Thought I would drop you a tasty bit regarding the new Kong trailer. I had the honor of being one of the 1st to see the long awaited full trailer for King Kong at this past weeks ShowEast event held at the AMC Pleasure Island 24 Theatre in Orlando, Fl. Universal unveiled the 3 minute trailer, literally fresh from the cutting room floor in New Zealand and screened it before Wednesday morning’s presentation of The Producers.

The trailer is nothing short of amazing and gives you just enough to make you wet your pants with glee and beg to watch it again. The scenes with Kong protecting Ms. Darrow from the T-Rex are beautiful! There is a quite impressive scene that has him throwing her through the air as the Rex lunges and then catching her again in the same hand. The trailer is pretty fast paced once Ms. Darrow is taken by Kong and doesn’t stop until Mr. Jackson gives us the ultimate money shot…

As the camera tracks left high above New York following a speeding bi-plane, Kong enters from the left hanging off the spire of the Empire State Building and leaps into the air turning and bringing his massive arm down to completely obliterate the wings of the oncoming plane landing effortlessly back on top of the ESB! The audience of over 1100 went nuts for it! They announced that it will be released on the upcoming Jarhead (November 4th) with priority placement on Harry Potter and the Goblet of Fire (November 18th).

They also had an amazing banner up at the event that was at least 18 feet tall and what I’m almost positive will be the teaser one sheet which should be out next week. The one sheet is a close up Kong’s head complete with bloody scars over the eye and twigs and leaves protruding from his fur with DECEMBER 14 at the bottom being the only writing on the poster. I have included a photo of the banner and I’m not sure if it will be used because it still had Howard Shore listed as composer. Hope this info is useful to you! 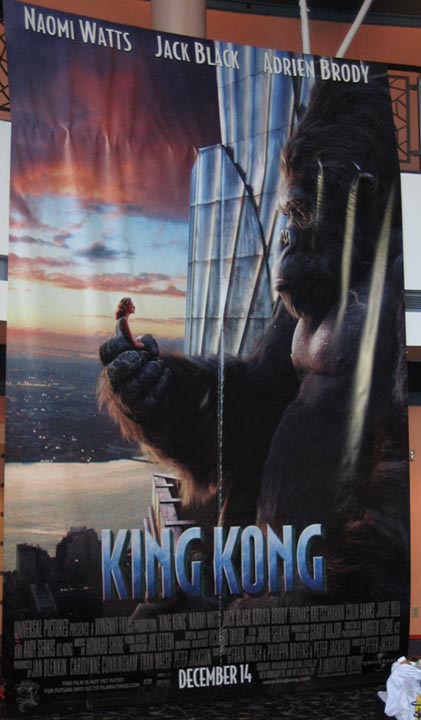