Massawyrm starved from a lack of Dr. Pepper goes on a GREAT RAID!

Hey folks, Harry here... As typical the worthless Massawyrm leaves off the best John Dahl films when listing his credits. Namely RED ROCK WEST and THE LAST SEDUCTION (technicality stole Linda's oscar!) - But that's ok... it's not like he ever worked in a fucking VIDEO STORE for a decade or anything. Sigh. Here's Massawyrm back with the first of many reviews that you'll come to stick down your pants till they're moist. Here ya go...

Hola all. Massawyrm here. Well, I finally managed to get Harry laid – a truly Herculean effort if ever there was one (11 more labors and my penance is complete) – and in gratitude, he’s asked me to come back and write for him again. So I come to you bearing news of Miramax’s new WWII action/drama The Great Raid.

In a strange move that shows either ballsy Americanism or that someone just wasn’t paying attention, Miramax is releasing a film during the week of the 60th anniversary of the nuclear bombing and surrender of Japan that serves to remind us all just how evil the Japanese were. Rife with vicious unrepentant captors, The Great Raid tells the story of the survivors of the Bataan Death March, who have spent three years in Japanese POW camps waiting desperately for their country, and General Macarthur, to come back for them. But the Japanese, wise to the movements of the American forces, have begun forcing the captives of other camps into air raid shelters, dousing them with gasoline and burning them alive. So opens The Great Raid.

Now, the American’s, having caught wind of the diabolical Japanese plot, have decided it’s time to go in and bring our boys back. So that means this is going to be a tightly paced men on a mission movie about a group of young recruits fighting their way through the jungles of the Philippines to stage a ‘great raid’, right? Nope, that, it seems, is the subplot. What The Great Raid turns out to be is a Hemmingway-esque story of survival complete with themes of manhood, honor and an ill-fated love affair with a nurse. And that’s not necessarily a bad thing. It just wasn’t my thing.

In true Miramax fashion The Great Raid tries to hook in an Oscar with Indie posterboy Joseph Fiennes starring as the ailing lead officer of the POW’s who’s only hope is that his would be girlfriend (Connie Nielsen), a nurse working with the Philippino Underground, can smuggle in a much needed shipment of medicine while everyone holds out for Macarthur to arrive – and begins digging their own air raid shelter. And while this is handled very well by director John Dahl (Rounders, Joyride and the all but totally forgotten Unforgettable – oh sweet irony), it simply gets a bit overly angst ridden for a film about the single greatest POW rescue in American history.

Enter Benjamin Bratt and James Franco, the men charged with getting the POWs out alive. When all is said and done, odds are you’ll find yourself walking out of the theatre as I did saying to yourself “You know, there just wasn’t enough Benjamin Bratt in that movie.” Now think about that – when was the last time you walked out of any movie saying “You know, there just wasn’t enough Benjamin Bratt in that movie?” Well, this is that film – the film that really showcases why he’s still working as anything other than as the “Well, Jimmy Smits is busy” goto guy and the role that any who see this will forever remember him as. He brings the manly gusto of old school hardass back into style – just a notch or two below Sam Elliot’s similar performance in We Were Soldiers. But he’s flawed, genuine and layered, despite his mediocre amount of screentime. He takes every moment given him and runs with it. When he gives his morale inducing speech to get his men in gear, you feel it in your gut. It’s one hell of a monologue that gives you the honest to god understanding why these men are willing to follow this guy into battle and possibly to their death. He’s charismatic, likable, commanding – something not easily done with this type of monologue (many have tried, few have truly succeeded) and it really gets you charged up to see these men do their thing.

Then there’s James Franco, once again playing James Franco – doing the voice over for the film with all the pep, vigor and hellfire of a Kevin Costner narration. If this movie has one real flaw, that isn’t simply what you were looking for in a war film, it’s his narration. It’s a good thing Franco is an actor and not my 11th grade chemistry teacher, because my ass would have slept through his entire class. But when he’s not narrating, he’s watchable – giving a good performance as the brain behind the operation – and most often playing off of Bratt who makes every single one of those scenes worth watching.

Every moment of the ramp up to the mission, as well as the mission itself, is perfect – and the raid manages to live up to its name, truly being a great piece of cinematic wartime action. From the dealings with the Philippino Resistance to the planning sessions, the raid elements of the plot are absolutely riveting – so much so that you want more, more, more.

But this is a Miramax film, so we cut back to the dying man and his Nurse girlfriend. Now there’s certainly a lot to like there, regardless of how sappy it gets at times (complete with the “I’m dying, so let me dictate this love letter telling her all the things I’ve never said” scene.) Joseph Fiennes is once again his usual fantastic self, giving a great performance despite the material. But the real winner of the camp scenes is Marton Csokas, the relatively unknown Kiwi character actor with an impressive geek resume (a resume so impressive, half of it can be abbreviated - LotR:FotR, LotR:RotK, SWE2:AotC, xXx – as well as Alex Proyas’s Garage Days, Richard Donner’s Cruddy but watchable Timeline, The Bourne Supremacy and most recently Ridley Scott’s Kingdom of Heaven. Not to mention he’s in the upcoming Aeon Flux.) Yeah – you’ve seen the guy before. You just may not remember him. Well, you will now. Csokas (pronounced Cho-Cash) is Captain “Red” Redding, the “I’m leaving and I don’t give a fuck about anyone else – okay well maybe just a little, but I’m leaving anyway” guy who adds all the flavor and humor to the camp. Without him the camp scenes would be a doldrom of overly wrought depression that would make you beg for 10 more minutes of James Franco monologue. Instead, he really gives one hell of a supporting performance that reminds you just why these guys keep going. He pulls off the funny asshole bit with real panache and his arc serves to be the real heart of the angst in the camp. This is his breakout role that’s going to get him a lot more work. Csokas and Bratt are the reasons to see this movie, hands down.

But if you have any sympathy for the Japanese side of the struggle whatsoever, you might want to prep yourself, because this film might just piss you right the hell off. There’s no attempt at all to show the Japanese as remotely human, and while it’s not nearly as offensive as John Woo’s Windtalkers (which denigrated the Japanese to a mob of screaming savages), it certainly won’t score any points with the Japanese – this week of all times. There’s not one moment of hesitation in the Japanese brutality, not one solemn look of ‘I can’t believe these are our orders’. These guys they’re killing wholesale surrendered, the worst of all crimes in their culture at the time, which makes them deserving of a painful, agonizing death. And the lead antagonist, the head of the Japanese secret police, gives nothing but looks so menacing you expect a prominent German to walk up at any moment and pin the Iron Cross on him (or the Paul Walker “I have only one expression award for excellence”.)

But despite the focus of the film being more on the misery than the rescue, The Great Raid proves to be well worth seeing, ranking as a GOOD WWII film rather than one of the greats. History buffs will enjoy the attention to detail (including the archival footage that shows just how specific they were with the casting – making sure all the actors looked almost exactly like the real men and women involved) and those who love a lot of sap in their films, most notably the wives dragged along to see a war movie, will enjoy this for the human side Dahl portrays here. And action fans, well trust me, the raid makes up for anything else you may have a problem with. Overall this film is a likable piece of cinema with a few shining points which far outweigh it’s issues, and may prove to spark up more than a few fevered debates over the dropping of the bombs.

Well, until next time friends, smoke ‘em if ya got ‘em. I know I will. 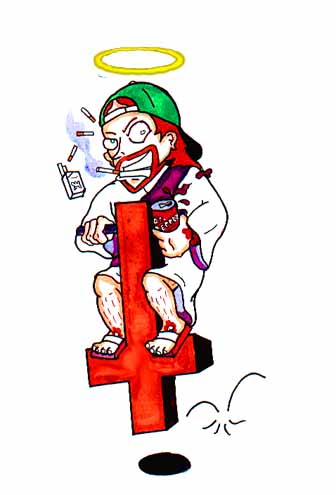