Ahoy, squirts! Quint here with a wide variety of picks from the Toronto Film Fest. Nigel, who I hear is not just good friends with Basil, but still really the brains of the operation. I mean, he figured his way up to Toronto and saw an amazing amount of cool flicks. After reading his description of Todd Solondz's PALINDROMES my mouth is watering. That could be the most off the wall bat-shit crazy film ever made and I, for one, am itching to see it. Enjoy the big report below... with pictures, no less!!!

Hi Harry, my name is Nigel.  I'm from Toronto and I must admit that this year's International Film Festival proved to be an outstanding one.  Never have I encountered so many dark and sexually fueled movies in one year.  While there were a few disappointing films (Sweden's A HOLE IN MY HEART and Bruce LaBruce's RASPBERRY REICH), they were eclipsed by many good ones (Zhang Yimou's HOUSE OF FLYING DAGGERS and Johnnie To's BREAKING NEWS).  Here are my reviews of the films that certainly stood out - with pictures.

Taylor Hackford’s RAY is a magnificent tribute to the first 35 years of Ray Charles’ life and career.  The film details the singer’s battle with exploitation, heroin use, and childhood guilt during his climb to success.  While the film is a spectacle of the singer’s musical genius, it is also an unflattering look at his life.  Despite admiring Charles’ courage and charm, you cannot help but feel shame and regret for his incessant drug use and womanizing.  Throughout the singer’s trials and tribulation, Hackford masterfully punctuates the singer’s resiliency through flashbacks of childhood memories with his mother.  Her tough love lessons forced Ray to rely on no one but himself.

Although, the film will allow audiences to rediscover the great talents of the incomparable Ray Charles, the real discovery is none other than Jamie Foxx.  Foxx brilliantly captures every nuance of Charles to a frightening degree.  After COLLATERAL and RAY, it is safe to say that Foxx will be a force in Hollywood.  It would be an outright crime if his name is not among this year’s Best Actor nominees.

RAY is so far my best film of this year.

The MACHINIST directed by Brad Anderson 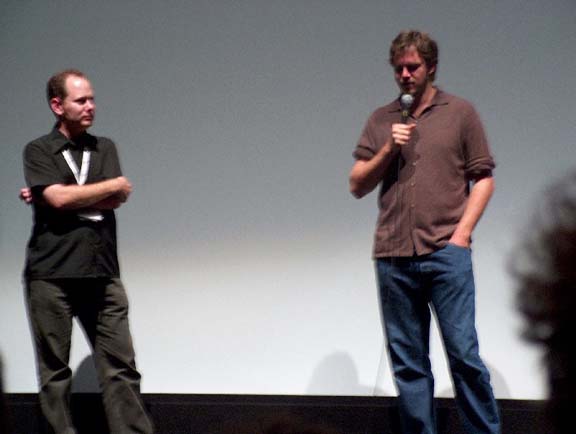 Directed by Brad Anderson (SESSION 9), THE MACHINIST is one of those films you want to end quickly not because it’s horrible but because you can’t wait to learn the ending.  Trevor Resnik (Christian Bale) is a troubled blue collar worker suffering from a year-long bout of insomnia.  To the amazement of everybody, his once sturdy body deteriorates to a skeletal shell.  Although his employers’ suspect drug use, we actually discover that the center of Resnik’s troubles stem from a much darker place.  When mysterious sticky notes suddenly appear on his fridge with a hangman puzzle, it sets off a chain of events which ultimately leads us to his real demons.

Anderson superbly brings to life Scott Kosar’s (2003’s THE TEXAS CHAINSAW MASSACRE) macabre script which is sure to get under viewers’ skin.  THE MACHINIST plays much like a vintage TWILIGHT ZONE episode with its dark tone and subtle eeriness.

Christian Bale, shedding an astronomical 60 pounds, is unrecognizable as the dainty Resnik (Anderson expressed his amazement to Bale’s physical transformation when he first step off the plane to shoot).  He competently carries the picture.

THE MACHINIST is an amazing thriller that will undoubtedly catapult Anderson’s directing career. 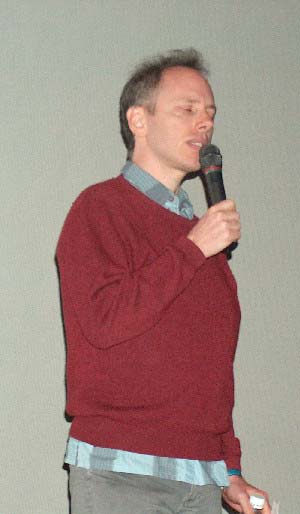 Todd Solondz’s PALINDROMES tells the story of 12 year old girl named Aviva who is so desperate to have a baby, she runs away from home.  This plotline may not seem out of the ordinary.  What is out of the ordinary however is Solondz’ decision to have the young protagonist played by several actresses who differ in age, race, and size.  All is all; Aviva is played by a young chubby black girl, a chubby young brunette, a lanky redhead, a skinny brunette, an obese black woman, and Jennifer Jason Leigh.  The young girl’s travels introduce her to a myriad of zany characters ranging from a guilt-ridden pedophile to a singing and dancing Christian foster home.  As he’s done with his most recent films (HAPPINESS and STORYTELLING), Solondz effortlessly elicits feelings of pleasure, disgust, embarrassment and remorse (sometimes within seconds apart) with PALINDROMES.

It’s easy to understand why Solondz is not a mainstream director.  His material peels away the layers of contemporary suburban life to reveal something dark and sinister.  In turn, he challenges us to reassess what society considers as normal.  While this may not make him a mainstream director, it certainly makes him an important one.

THE HEART IS DECEITFUL ABOVE ALL THINGS directed by Asia Argento 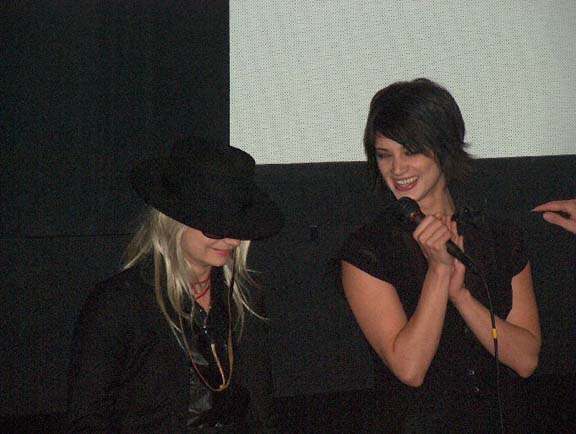 Asia Argento may be best known as Vin Diesel’s love interest in XXX.  But she is also an ambitious director who has proven from her directorial debut (the sexually-heated SCARLET DIVA) that she is not afraid to push the envelope.  In THE HEART IS DECEITFUL ABOVE ALL THINGS (based on J.T. LeRoy’s autobiographical short story collection), Argento plays a seemingly reformed prostitute and drug abuser who regains custody of her child from foster care.  Shortly after the social workers drop off her child, so begins a drug-hazed road trip of sex and debauchery.  Not for the faint of hearts, THE HEART IS DECEITFUL ABOVE ALL THINGS is precisely the type of film that keeps the MPAA in business.  There’s rampant sex, child-molestation, child- abuse, drug-use and torture.

Argento presents an unflinching portrait of an unscrupulous mother so desperate to be loved that she would sacrifice her son’s innocence.  Child jeopardy is not a popular subject matter to North American audiences; therefore the film is bound to conjure heated debate.

Along with Argento, LeRoy was in attendance at the screening, and was obviously moved to tears.  I suspect he won’t be the only one if this film is released at all.

Sadly, one film you won’t see at your local cinema is Spike Lee’s SUCKER FREE CITY.  An emotionally stirring film that follows the lives of 3 very different young men in San Francisco: Nick, an entrepreneurial white boy from Mission Point; K-Luv, a black gang-banger in Hunter’s Point, and Lincoln, a debt collector for the Chinese Mafia.  Despite coming from different walks of life, unforeseeable and violent events inevitably push these men together.

After the critical disaster SHE HATE ME, SUCKER FREE CITY reaffirms Lee’s greatness.  He affectionately handles the characters from Alex Tse’s brilliant script.  As a multi-cultural drama, there is never a moment when one ethnic group’s story is favored over the next.

SUCKER FREE CITY was originally a Showtime pilot that was intended to be a series on the network this fall.  Unfortunately, the Powers-That-Be scrapped the project to green-light Hank Azaria’s HUFF, a psychology drama.  As a result, SUCKER FREE CITY will be aired by Showtime as a standalone film. 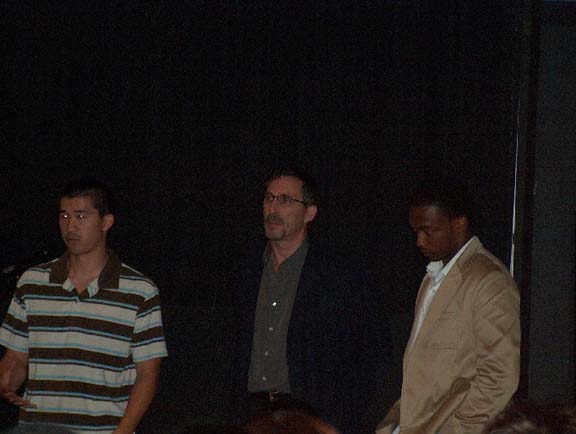 It was obvious at the screening that the audience was appalled that the pilot was not picked up.  They were anxious to know the outcome of the story’s few loose ends.  Tse (pictured with producer Preston Holmes and actor Anthony Mackie) who wrote the script was obviously passionate about the project.  He had already envisioned plot-devices for the second and third seasons.

When this film airs on Showtime, I implore you to see it.  It is not often that a network program can be so poignant and penetrating.  HBO’s DEAD LIKE ME and SIX FEET UNDER pale in comparison.

THE ASSASSINATION OF RICHARD NIXON directed by Niels Mueller

In THE ASSASSINATION OF RICHARD NIXON, Sean Penn stars as Samuel Bicke, a hapless furniture salesman whose failure to save his marriage and succeed in business inevitably takes its toll on his sanity.  As the title suggests, his inability to achieve the American Dream ultimately drives him to plan the assassination of the President by flying a commercial airliner in the White House.  In his directorial debut, Mueller effectively explores the would-be assassin’s breakdown.  Penn effortlessly personifies the pathetic Bicke.  Even though we condemn Bicke’s violent actions, we nonetheless identify the pain that motivates him.  Despite the films eerie parallels to 9/11, Mueller insists that his screenplay (co-written by Kevin Kennedy) was written before the tragedy. 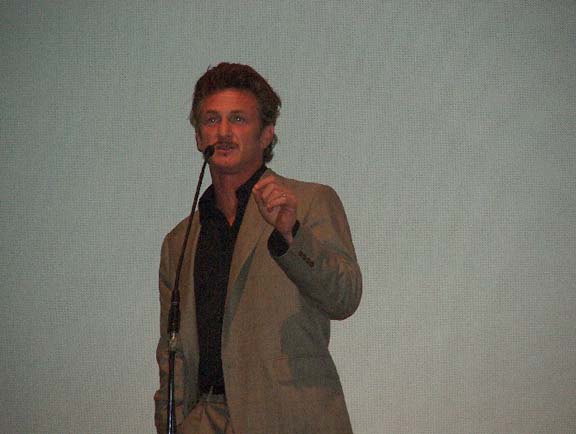 Penn briefly appeared before the screening and added that while he couldn’t ask us to enjoy the film (obviously due to its dark material); he wanted us to be glad to see it.  Judging from the reactions at the end of the film, many certainly were. As an aside, I had dared to bring my FAST TIMES AT RIDGEMONT HIGH dvd to be signed by the actor.  But he was just too damn intimidating to approach.