Some Solid Info On Mickey Mouse In THE THREE MUSKATEERS!!

Honestly... I had no interest in this at all until Harry and I got the following review in the e-mail. Even so, I can’t help but be skeptical towards any of Disney’s DTV animation, especially when classic characters are involved. But check out how excited this guy is... 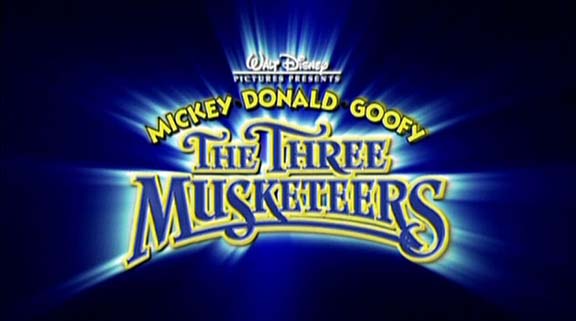 About two years ago it was rumored the guys at Disney were working on an animated film based on Dumas' The Three Musketeers. It was a long time in coming but the film finally got under way and I'm extremely excited to report that it's only a few weeks from being completed. But don't expect a traditional retelling. This is not The Three Musketeers as Alexandre Dumas' originally intended - this however is not a bad thing. Let's just say ol' Walt would be very, very proud and the resulting production may very well have brought a tear to his eye. 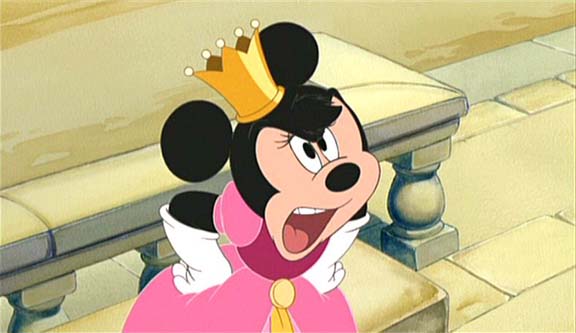 At this stage the insanely talented team behind the picture are doing the final music and effects mixing to what I consider one of the most enjoyable and well thought-out animated Disney films in recent years. Even better, it's frickin' awesome to see Mickey, Donald, and Goofy team up in this feature length adventure. Captain Pete is brewing a devious plot to take over France and it's up to Mickey's Musketeers to rescue Princess Minnie and her lady-in-waiting Daisy, from certain peril, not to mention the rest of France as well! Yes, this is 2D animation, but as a critic myself on the state and quality of two-dimensional animation, I really feel this picture deserves some major attention. With fully realized and absolutely beautiful water color mattes and charming, respectful representations that are true to the characters, Mickey-era fans aren't going to want to miss out on this gem. And hopefully, it'll renew some interest in Disney's once-heralded and ever-popular flagship character, Mickey Mouse. 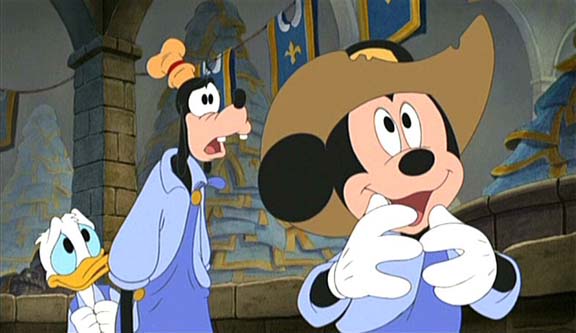 *TRAGICALLY* this film is currently slated for a direct-to-DVD release. Unlike the sub-par direct-to-video sequels (ie. Cinderella 2, Hunchback 2, or Lady and the Tramp 2), Mickey's Three Musketeers is about as good as any theatrical animated film gets. I've seen it on the big screen, and believe me when I say: IT KICKS MAJOR ASS. It has amazing production value and it infuriates me to think that it very well may fall victim to the instant-home-video phenomenon. A film this good doesn't deserve to slip under the radar and miss its big chance. 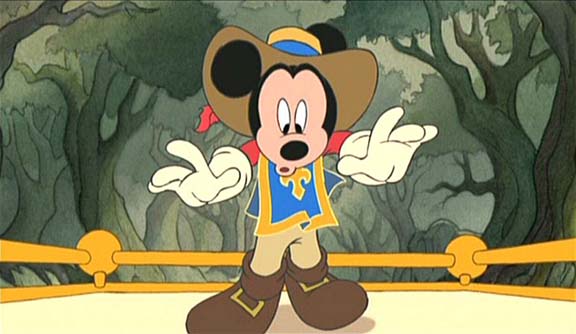 There are two or three things I'd like to briefly comment on that I think substantiate my opinion: 1) The Story 2) The artwork and animation, 3) The voice acting, and last but certainly not least, 4) The music (Bruce Broughton's score + songs). 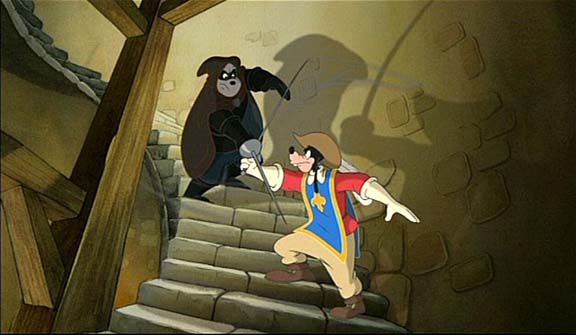 It's not Dumas' classic. This is a Three Musketeers tale that Mickey Mouse might very well have sat down and imagineered himself. It's Three Musketeers - 3, not 4. Put Mickey in a D'Artagnan-like role and Donald and Goofy in supporting musketeer roles, and you've got a dynamic trio that's ready for action. And boy do they give it to you. Oh, and did I forget to mention? THIS IS A DAMN HILARIOUS MOVIE! It's imbued with all kinds of humor, and not cheesy, childish gags, but really, really funny shit. This is the kind of stuff my parents would get a kick out of! In fact, I plan on sharing it with them - and all of my friends. Those in the screening room were definitely rolling on the floor with me. Don't let this fool you, though. However funny it may be, it remains a touching story about friendship, loyalty and love. To help the story along, there are 5 or 6 *very enjoyable* songs that progress the storyline (rather than get in the way of it). Read about those below.

The artists behind the project have approached it in a very traditional way. As I said above, the watercolor artwork is absolutely stunning. The colors in this film are intense. The treatment of the characters and how they look on screen has been kept and held to a very high standard. Mickey, Donald, and Goofy aficionados: FEAR NOT. Deep down, whether you know it or not, this is a movie you've been waiting to see. 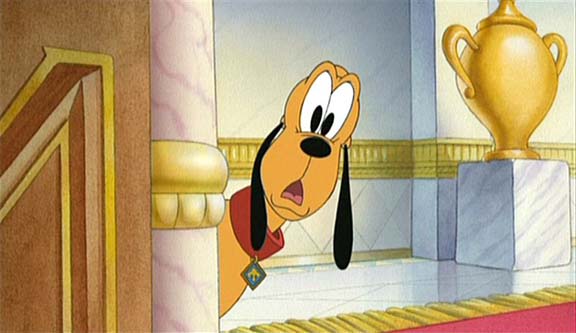 All the favorites are here: Mickey, Minnie, Donald, Daisy, Goofy, Pete, Pluto and a couple of other surprises. To make them a reality, an all-star voice cast was hired, including the incredible Jim Cummings as Pete, Wayne Allwine as Mickey, Tony Anselmo as the humorous and intentionally hard-to-understand Donald, and Bill Farmer as Goofy and Pluto. It's like a trip down memory lane, and these guys pull off the characters as if they were the real deal from way back when. Hell, if these characters are to live on, they're the real deal today.

MUSIC (NOT TO BE OVERLOOKED)

I can't rave enough about the music in this film. Thank God a composer like Bruce Broughton, whose musical expertise, knowledge and appreciation for the art of film music, and general sense of humor, youthfulness and admiration for writing dynamic, compelling film music, was hired to lend his talents. Wow, that was a long sentence, but in my opinion not long enough. I could stretch it for days. Hollywood needs to get a clue and put him on a pedestal. Anyway, what these guys have done is quite clever, lemme tell ya. The songs in this film are adapted versions of classical pieces, including Johann Strauss' The Blue Danube (transformed into a great, catchy love ballad), Georges Bizet's Habanera (another hysterical love song), and In the Hall of the Mountain King by Edvard Grieg (The Bad Guy Song - hilarious). Also expect to hear some very entertaining excerpts from Gilbert and Sullivans' masterpiece opera, The Pirates of Penzance. All of which are superbly performed by the greatest union musicians in Hollywood (between 85-90 players in the orchestra... which translates to BIG), under the direction of maestro Broughton. I'm still having a hard time shaking these tunes from my head. As for Broughton's score, it's swashbuckling, adventurous, melodically catchy and hell, just downright fun. You won't find another score out of Disney that surpasses the quality of this one. 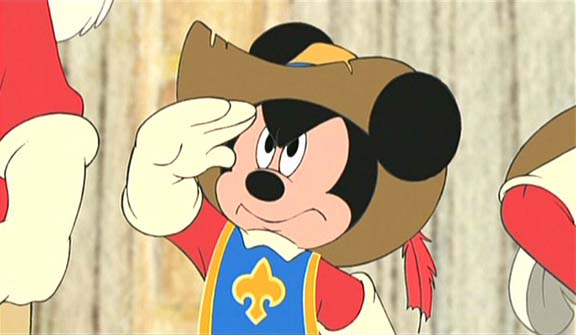 I just saw the trailer for this film on the new Lion King 1 1/2 DVD, and needless to say, IT SUCKS. IGNORE IT PLEASE. They've edited together something that spits in the face of what the people on the project have worked so hard to achieve. Disney doesn't tell you anything about the story, and the music they utilize has absolutely nothing to do with what's in the film. I'd dare say it clearly reflects the Disney big-wig's interest and mentality towards the project. They could care less if it succeeds. As a fan of not only the film, but Mickey as well, I find that insulting. I can't imagine how the crew feels. Because the trailer sucks, if you judge the film on the basis of the trailer, I think it'd be fair to say that YOU SUCK as well.

Mickey's The Three Musketeers, in one word, ROCKS. If Disney releases this on DVD without giving it proper theatrical exposure, I really think Comcast should go ahead and de-throne the morons currently running the show. Fans, I suggest you write letters to Eisner & Co. Beg and plead that this film be distributed theatrically. Anything less is doing the film, its cast, its crew, and simply the legacy of Mickey Mouse & Friends a grave, grave injustice. 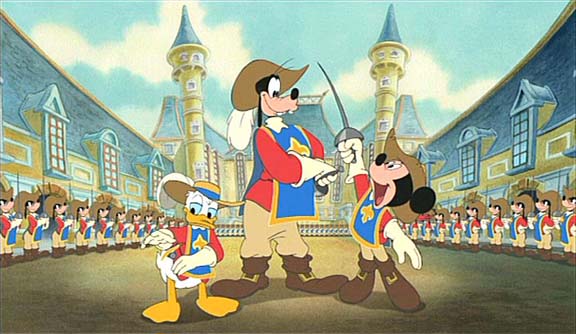 Thanks for sending it to us, Wade, and here’s hoping this is the real deal. Disney could certainly use a good animated film or two under their belt these days...