Hey folks, Harry here with Quint - who seemed to NOT ask Frank Darabont - "What the fuck? Did you write a shitty Indiana Jones 4 script? Is that why we don't get it right the fuck away?" Of course, perhaps Quint has a modicum of class... Wait, I know Quint. Like me, he's classless. Why didn't he put the screws to Darabont. Make him scream the details, the page count, the basic story!!! Sigh, here's Quint...

Ahoy, squirts. Quint here from the Santa Barbara Film Festival with a couple reviews and some nifty movie news from Frank Darabont's Q&A after a screening of his early effort BURIED ALIVE.

I've been fascinated by sharks since I was a young child. Come Shark Week on the Discovery Channel I'm glued to the TV. Of course my love of the film JAWS had a lot to do with that. So when I heard that a film by the son of Jacques Cousteau on sharks was playing at the SBIFF I made sure to sign up.

The film is under an hour long and focuses on the impact of the rising popularity of Shark Fin Soup on the shark population. We see footage from the decks of huge ships that just pull up sharks, lob off their fins, then dump the bleeding, struggling body of the slowly dying shark back into the ocean where it sinks slowly to the bottom where it will suffocate to death.

The real tragedy of this is that the shark fins themselves have no taste. In Asia, where it's a delicacy, they have to add chicken flavor to the soup to give it any sort of taste whatsoever... so the shark fin is just there for decorative purposes.

The film really excels with its underwater photography. There's just some amazing images... a school of rays gliding like angels... nocturnal fish adapted to look like jellyfish... Anyone in love with the mystery of the ocean will really dig this film.

Cousteau ends the film with a giant risk to disprove the myth about Great White Sharks as mindless man-eaters... he swims freely among them, even grabbing onto the dorsal fin and taking a ride. This part is mind-blowing and makes the movie a must see. I'm sure you'll see this on Discovery or TLC or something like that. It's worth a look.

So this one had raves out of Slamdance. All I knew before going into the film was that it was a documentary about a famous Seattle street performer named Richard Peterson... didn't exactly raise my flag if you know what I mean... But then I heard that The Dude was presenting the screening and if The Dude presents something you damn well show up to it.

And I'm glad I did. The film is about Richard Peterson, a large man-child. He's a savant, a man just full of love and excitement as well as talent with a trumpet and piano. His love of music goes back to childhood where he was captivated by television music... Not just TV themes, but the actual music stingers. SEA HUNT is by far his favorite.

This guy is a character and absolutely fun to watch. The three directors of this documentary had to walk a very tight line because they have to show Richard as he is, but not make him a joke. And they did so, which makes for a very fun time for the audience. Peterson's personality is magnetic, even if you have to struggle to understand what he's saying. To get an idea of what Richard sounds like, think of Homestar Runner with more mumbling.

At one point when Jeff Bridges was in Seattle shooting AMERICAN HEART, he was sought out by Richard. When he first saw the trumpet player, Richard pointed and called out, "Son of Sea Hunt!!!" 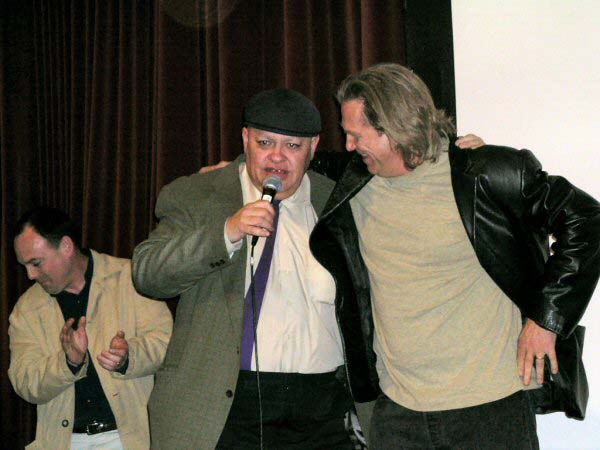 The documentary is the best I've seen at the fest and will be touring around, I'm sure. Entertaining, involving, well made... it'll run you through, that's for sure. Check it out if you get a chance.

I am a huge fan of Frank Darabont's films. SHAWSHANK, GREEN MILE and MAJESTIC are shining examples of non-cynical filmmaking. The joy of the subject matter and the entire process is evident in the films. I hadn't seen BURIED ALIVE and was very happy the fine folks at the SBIFF programmed it into the fest.

After the film, Frank and Tim Matheson did a Q&A. I also met with him after the Q&A where he was kind enough to stay around for at least an hour meeting his fans, signing autographs and answering questions. 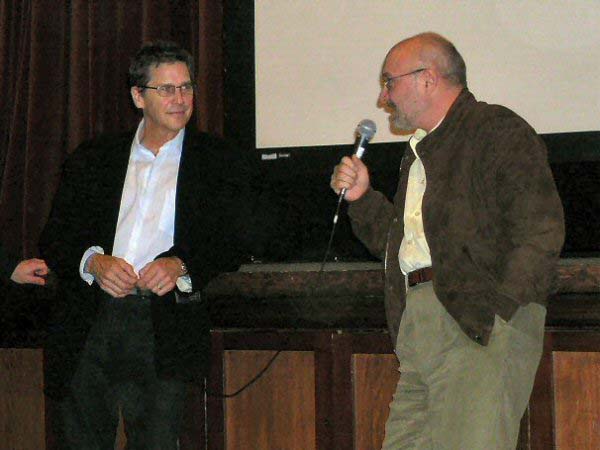 During the Q&A, Frank brought up this property he has... One of, if not THE, best Stephen King short stories and one that I'm dying to see made. He talked about how he'd love to shoot it in black and white, but that the studio would definitely nix that idea. He did say that he'd love to strike 2 or 3 prints of the film in black and white and show them exclusively in a few select theaters. Sounds really cool to me.

It's in the works! Super special edition with commentaries abound. I can't wait! He must get King to record a commentary track. That would be the cat's pajamas, so to speak. After speaking with him, it looks like we're going to be setting up an interview in the near future. Look for more info then!

Anyway, that wraps this one up. I've got a couple interviews with the people behind LOVE'S BROTHER, my favorite film of the festival and a few more movie reviews. 'Til that day, this is Quint bidding you all a fond farewell and adieu.

email: Email Quint here, before he up and vanishes, like a greasy fart in the wind!!!