The Japanese poster for the DAWN OF THE DEAD remake is at hand!

Hey folks, Harry here with a reader that sent in the Japanese poster for the DAWN OF THE DEAD remake. Having read the early script for this, and talked with some folks that have seen the shooting script, I don't think it would be necessarily wise to bet against this film. My original belief when I heard they were remaking TEXAS CHAINSAW MASSACRE, was that they'd desecrate it completely. Instead, they made a very intense Studio A Horror film. One that is never self-referential, one that doesn't ever really pull its punches... and that was oddly beautiful while grotesque. DAWN OF THE DEAD is an interesting case, it is... like TEXAS CHAINSAW MASSACRE, one of my all-time favorite horror films... but I have to admit, when I read the script to it... it felt like it was honoring the tone of the original, albeit creating something very different... which is kinda the point of an adaptation, be it from stage to screen or book to screen and now, even screen to screen.

Here comes the first "Dawn of the Dead" remake poster, and Japan is in the lead.

The poster is very good looking, and this little girl's eyes resembles the eyes of the alien children in "Village of the Damned" remake...you know, when they start flashing their eyes and making things to happen...terrible things.

Of course this little girl doesn't look like your ordinary zombie...and the only children zombies I remember in the original "Dawn of the Dead" are the ones that attacks Peter Washington (the great Ken Foree) when they stop to put some gas in the helicopter.

We will see what they will come up to. I love horror originals (and this is one of them!) but, in those recent times, some (and I mean some!lol) remakes are occupying a deserve place in the horror filmmaking. Example? The Ring was a very good movie, I bet TCM will be an amazing film, Dark Water, and so on.

Well, i hope you guys put this new and pic on the site for others to enjoy.

You can call me, Movieholic. =) 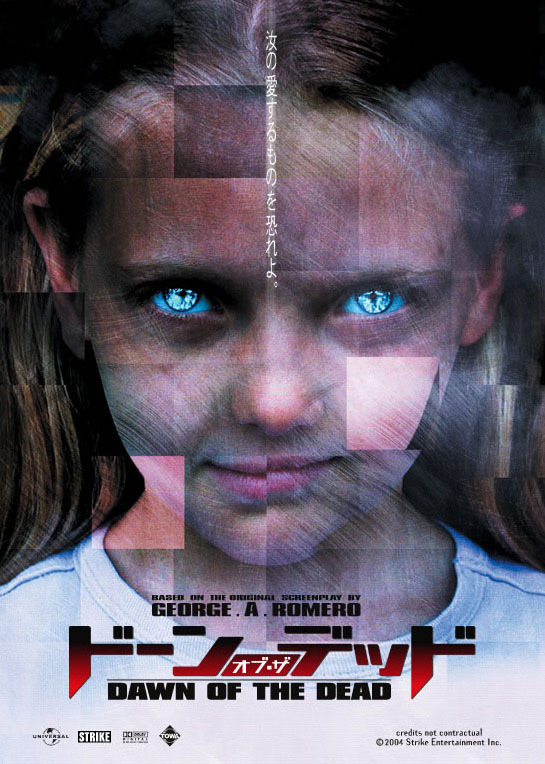