Now this is who should play Van Helsing! I'm not Moff-ing around I'm Tarkin the truth!

Hey folks, Harry here... Ok, you ready for the creepiest most jaw droppingly scary bit of casting ever in the history of mankind... I mean, this guy looks like a Czech Marionette version of the real Grand Moff Tarkin... Ya know? Like he was sculpted out of flesh based on the Absynthe charged memory of Tarkin. And if this fucker can sound like Peter Cushing... then I am just gonna run screaming out of the theater... "ZOMBIE CUSHING!!! ZOMBIE CUSHING!!!" I mean... it's like the "LIFEFORCE" version of Tarkin.... Just creepy... excuse me... it's time for me to NEVER SLEEP AGAIN...

I'm sure by now you've seen the leaked image of Episode 3's Grand Moff Tarkin.  It's at TFN, but probably not for long.  I included a comparison shot for you to take a look at.  Pretty cool looking indeed.... and a bit creepy. 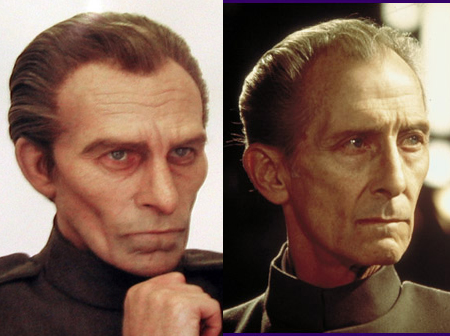 Meanwhile, this is what the actor playing Tarkin really looks like... he's Christopher Eccleston - you know... from JUDE and 28 DAYS LATER... 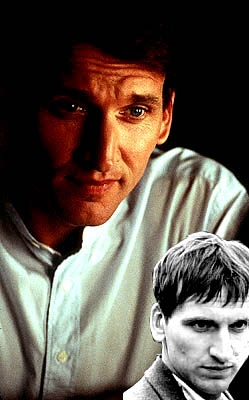