SHAUN OF THE DEAD news pops up

Hey folks, Harry here... Next year, in all liklihood we'll be hit with two hilarious Zombie flicks... The first is the Spierig Brothers' flick UNDEAD (which btw will be playing at Saturday night at Maniafest and the Lammele's on 2nd Street in Santa Monica. Get out and check it out you L.A. Geeks!) and then there will be SHAUN OF THE DEAD. The second feature film from Edgar Wright who made FISTFUL OF FINGERS, a comedy western as his first film... God, I want to see that! But then he went on to direct one of the funniest goddamn British television shows around, called SPACED... and if you've never seen SPACED, then... just hush, and try to find it. I have complete faith in Edgar to deliver genius hilarity... if he doesn't... I say we kill him. 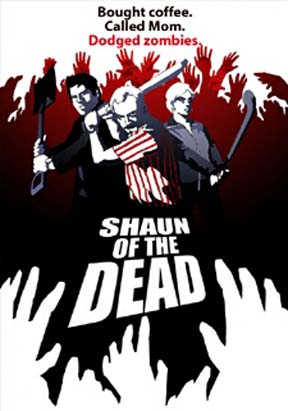 SHAUN OF THE DEAD - ON THE BBC THIS MORNING

Ok guys, you've probably had loads of people sending you emails about this, but I thought I would send you what i saw - just in case no one else bothers to mail you.

So it's Julius Caeser here in Manchester reporting in on the Beeb's interview with Simon Pegg - he talked openly with a beeb reporter about the writing 95 years) and development (2 years) of Shaun of the dead.

More interestingly though they cut to them filimng a scene outside the Winchester Arms 9I think) pub in London.

The scene involved hundreds of zombies wlaking the streets in typical zombie fashion. Through the middle of them walked Simon Pegg's Character and his co starts, fooling the Zombies by walking around in a Zombie fashion - if that makes sense. The scene has the potential to be absolutely hilarious.

Simon pegg then went on to mention some of the things in the script that had not been done due to budget constraints - mainly a scene where in the background of there's absolutre mayhem going on and a Cessna (sp?) crashes in the background.

Pegg was then joined by the Zombie Choreographer who went on to talk about how hard it is to walk like a Zombie without looking like you're an extra from a Michael jackson video.

Anyway - wish you guys could have seen it - if anything else pops up, will let you know.

keep the faith, oh and if you'd like I'd love to send you a review of orbital#s soundtrack for the new movie Octane - and I forgive you for not posting my scoop that Aphex Twin will be doing the music for Burton's Charlie and the Chocolate Factory.