Hey folks, Harry here... Ok, so CABIN FEVER has a good weekend at the Box Office.. big deal right? Over-rated load of shit? You hated it? You loved it? You still don't care? See, the big deal about CABIN FEVER getting the release it did was none of the low budget horror films of old ever got a release like this. Evil Dead never opened on 2000 screens. Texas Chainsaw Massacre never opened on 2000 screens. I'm not talking about sequels or remakes, I'm talking the initial films. Those first ones. BAD TASTE played on like 100 screens in the United States. Sure, you could point at something like BLAIR WITCH PROJECT, but that was a gimmick film, that never really looked like what most audiences considers a "real movie" to look like. It was all about the promotion. CABIN FEVER is just a good low budget horror film... One that did like made it's budget back many times over on opening weekend. And, had they opened it last weekend, it would have been the #1 film in the country. SO -- why is that good? Well, just got this letter from Eli... Check it out...

So I wanted to give you a tidbit of info for your site, if you're interested. I got a very nice phone call from Don Mancini, who said he loved Cabin Fever and said our strong opening helped him get the new Chucky film off the ground. He said between Ronny Yu, Victor Salva, and now Cabin Fever, the financiers have kicked into high gear and he's now in prep. I think it's called "Seed of Chucky." So even people who saw "Cabin Fever" and fucking hated it should know that their dollars ultimately went to a good cause.

Also, it's official - the first Raw Nerve film will be "2001 Maniacs," directed by Tim Sullivan. We're going to be shooting in a few months, and Robert Englund will star in it. This film as you know was supposed to go last year, but three days before shooting, the financing collapsed. So I brought it to Raw Nerve to rescue it, and we'll be shooting in November. Tim's new draft is awesome, it's going to be a shitload of fun, with lots of blood, guts and nudity for the fans to enjoy. I will be on set for all the tit shots, just to make sure they're nice and sweaty!

Hopefully the fans will see these two concrete examples of why it's important to support each other, and know that I'm serious about doing everything I can to help save R rated sick as fuck horror.

Hey folks... Harry here again... Why is there this sense of "All for one and one for all?" amongst folks like Eli Roth in regards to horror? I'll tell you why. Ya see, for years Horror Directors have been treated by the industry and the MPAA as if they were essentially the scum on the bottom of a pornographer's shoe. Second guessed and ruled by fools that didn't have a clue about the genre these directors had dedicated so much love and affection towards. I know a great many of the folks in the following photos, as well as the horror directors that could not make this meeting, and can attest to the fact that they are all really warm and gracious folks often times frustrated by the situation they have been put in. Struggling to tell the stories they love, without the budgets, controls or respect inherent to most other genres of filmmaking. SO... they just gonna live with it? Hell no. They formed the MASTERS OF HORROR society, and they gather at secret locations to give each other advice... concoct plans of attack... Help each other get a leg up on an industry they have to rassle with. 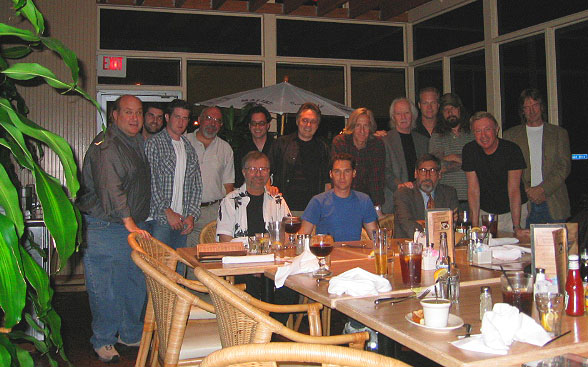 “We’ll let you take the picture, if you tell us who told you we were here.”

John Landis is barking at me, incredulous that I’ve waltzed into the Hamburger Hamlet on Sunset to take an impromptu group picture of the Masters of Horror. Their gatherings have been documented before on Ain’t It Cool, but to the best of my knowledge, this is the first time that one of us has had the balls to infiltrate their secret society, and, frankly, staring down the glowering likes of John Carpenter, Tobe Hooper and Larry Cohen, I’m beginning to feel that my intrusion is about to rank as one of the most colossally awful ideas I’ve had since my three week guest hosting stint on SHIPMATES.

But when some of the greatest horror directors of all time congregate for dinner, rest assured that AICN will be there to take pictures, and get hollered at by John Landis. So here they are, your Masters of Horror as they were on the evening of September 6th, 2003. (Extra special thanks to our own super spy “Sarah” for taking the picture while I stood uselessly gawking at this rare assemblage of directorial genius. Also, thanks to “Rocky Charmin” for the random email that tipped me off to the location of this clandestine assemblage.) 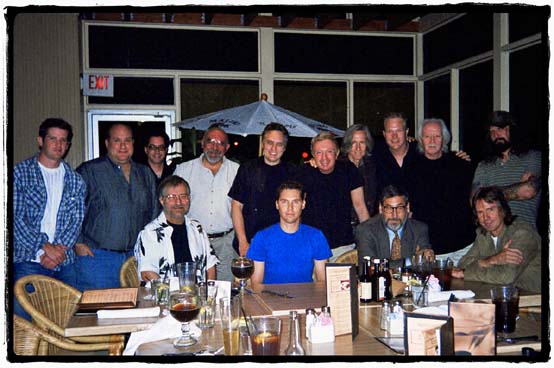