Wanna see a Movie with Balls' Well after too many ball-less movies, the biggest balls ever will be in ELEPHANTITUS!!!

Hey folks, Harry here... I rarely post stories about the making of Indie Indie projects... But... Well this one I feel like giving a break cuz... well they just had the balls to put em out there, dangle them for us to contemplate and now... as I stare at those balls I realize that today has cosmically been a day all about BALLS. First there's the strange rumors about a certain celeb possibly getting de-balled. Then Synapse Films sends me FLAVIA THE HERETIC, which actually has once scene of a horse being held down and its balls being cut off... FOR REAL and I was screaming and squirming and That wasn't the most stunning moment of the film. Then there was this email. It was as if, the world was cosmically lining up for this "Harry Witt" fella and his movie about a teenager with the largest balls ever. Somehow... I think locker-room showers were just a little strange for this boy. As I sit here I can't help but think... This sounds like the greatest possible collaboration project that Tim Burton - Lloyd Kaufman - John Waters & The Farrelly Brothers don't have the balls to make... But Harry Witt does, I just wonder what actor they'll get with the balls for the part! Here ya go... 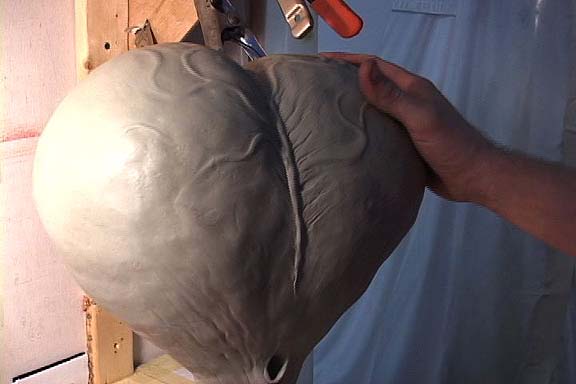 When most people see this picture they think it's an alien head, but it's not! This is the giant testicle prototype for the outrageous new film Elephantitus. The balls were sculpted and cast by Prop Fabricator Marcus Laporte, a mainstay in the props departments of SpyKids 2 & 3. We are scheduled to go into production on August 11, 2003. We will shoot the film in Austin. Our promotional web site is already up and running.

Please be my guest in the bizarre and sometimes disturbing world of Elephantitus: ElephantitusMovie.Com

My name is Harry Witt and I'm an independent filmmaker here in Austin. This will be my first feature film.

The website will be updated on the 10th, 20th, and 30th of each month with exciting new tidbits.

"The only thing bigger than this kid's balls is his heart!!"

Thanks for taking a look,