The SideShow / Weta Winner in the Ring Wraith Contest - Behold This Wraith Rides A Cock! 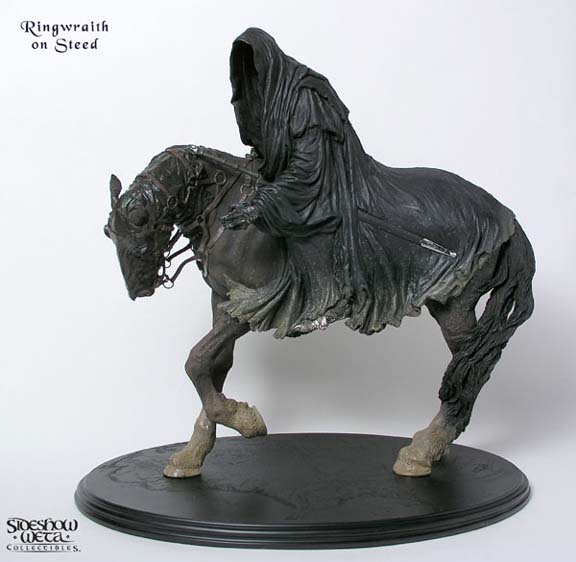 Hey folks, Harry here... Well as it is May, the conclusion of the grand contest to win a Ring Wraith on his Steed from SideShow/Weta and SideShow Toys has come to an end. As I only had one prize to win and there were so many folks trying to win, I decided to give you my favorite 3 beginning with 3rd Place and working my way up towards the winner of the statue.

Our 3rd Place RingWraith creator was Anne Franklin from Abbotsford, BC, Canada with her absolutely fearsome Ring Wraith on... Is that a Hamster or a Gerbil? Perhaps I should bring in a celebrity expert to tell me. What famous person knows the difference between Gerbils and Hamsters? Well anyway, this is definitely one varmit you wouldn't want on your ass... Look at that pure animalistic RAGE, the FUROR in that steed's eyes! A thing of nightmares? To be certain! 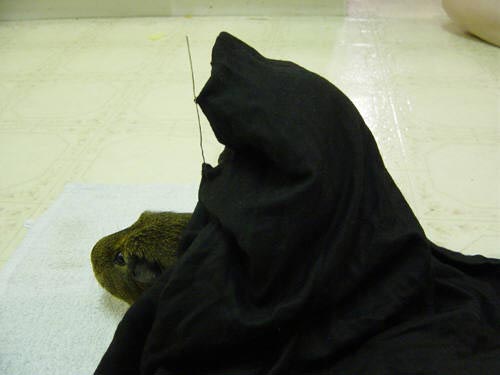 Next we have Jim Kee from Oviedo, Florida with his fearsome Nazgul made from wire and an old t-shirt and a letter opener sword riding atop his trusty Savannah Monitor named Jabba! Ya know... Had the BEATLES made their version of LORD OF THE RINGS back in the Sixties like they had wanted... This might very well have been what the Witch King rode to fight at Minas Tirith! Only add fake rubber bat wings and suspend that baby from wires. hehehee... No, I don't advocate animal torture... It's ART! 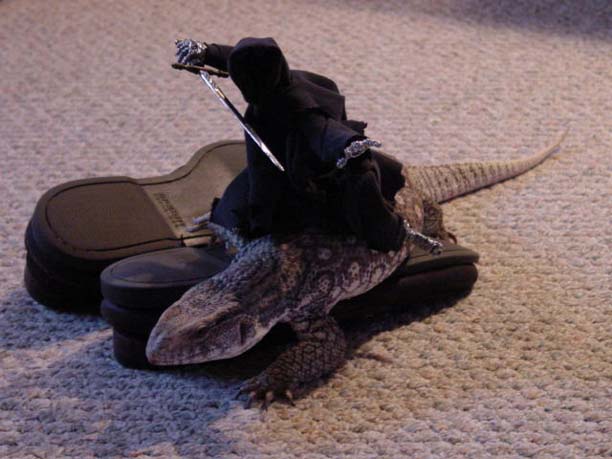 The winner... Man... I really have a hard time keeping a straight face in thinking about the winner here. Dale Hwang from Flemington, New Jersey has created a beast of such fearsome might, yet filled with innuendo and double entendres, as to be a thing of absolute absurdity. This Ring Wraith Truly Rides Cock! BEHOLD the story of Dale, his quest for the steed of champions and how he came to put his custom made Ring Wraith upon his Cock! Here ya go....

As I think I mentioned in my post, my dander is up. Attached are 15 photos.  Yes, I know that is a lot, but they don't even begin to capture the hilarity of it in real life.

The first 8 are of the wraith astride my rooster, Handsome.  The next 3 are of it perched upon my far from happy cat, Emma.  Lastly are four 'making of' pictures prior to the rodeo.

The break down is thus:

1-4 are essentially a slide show as the rooster stood and then turned first away and then towards the camera. 1 and 4 are what I call beauty shots.

5-6 are a few angles otherwise not already seen

7 is a distance shot, with a hen running in the background

8 cracks me up every time; it is of the rooster running.  Unfortunately, the wraith is a little wonky; we took this one before I had adjusted it.

a-b are of one of my cats essentially trying to get away so she could scrape the thing off her back.

c is when she reached the floor and decided she would try rubbing it off by rolling.

I is of just the mannequin, sans costume, mounted on the saddle

II is a close up of the sword, knife, and belt I made

III is a side view of the mounted mannequin wearing the robe, cloak and belt

I looked at the costume gallery on the extended DVD and patterned my wraith and its saddle after the samples there.

Aside from the steeds, there are 3 main elements: the saddle, the mannequin, and the costume.

The saddle is made of brown paper strips glued together and then painted black, with straps made of grosgrain ribbon.   The saddle is fully adjustable, and has adjustable stirrups as well.  In front, there is also a piece in the shape of a stylized eye which holds the straps in proper relationship to the mount and the girth.

The mannequin is made of more brown paper, glued over a light wire frame, and again painted black.  The hands, feet, and thighs were dry brushed with chrome and then black paint on the outside sides to look like armor, and I made separate pieces to go over the arms (vambraces and rerebraces), shins (greaves), and knees (knee cops?).  Again, these were painted for that aged and pitted look.

The costume is comprised of several layers.  First is the grey split skirt robe.  This is covered by a large cloak with shoulder inserts.  The front of the cloak is belted over the robe, and then draped artfully over the robe.  The belt is a thin leather lanyard with a removable sword and dagger.  Over the cloak is a hood, which has long bits that hang down in front, as well as a shoulder cape that flares in the back.  I wet all the fabrics and crinkled them as they dried to emphasize the ragged edges and improve the drape.

I tried it on all my 4 cats the night I finished it.  Only one stood still long enough to take any pictures.  I tried to put it on 2 guinea fowl, but they weren't tame enough, and have been so traumatized that they ran away to hang out with some neighborhood fowl, and won't come near me anymore.  I have hopes that they'll come home soon, though.

Handsome, my gallant rooster, was a great sport.  I blindfolded him with a cloth bag over the head so I could put on the saddle. He let me do that TWICE, as the first time the wraith was lopsided.  You can't see it because his feathers obscure the straps, but two run in front of his wings and then swing under to attach to the girth which is behind his wings.  He never bated, so I couldn't get a shot of his wings extended.

He wandered around the yard while we took pictures and didn't seem to mind the thing on his back, although he did scratch at one spot where the straps were bothering his feathers.  He let me catch him without any trouble.  Needless to say, he got a treat of cracked corn.

I realize that the pictures are rather bright and green, but I'm afraid springtime in New Jersey is far from Mordor-like.  I console myself that my wraith on wings was perhaps in Ithilien on a reconnaissance mission to Osgiliath.  Making the wraith was a lot of fun, and once I found the proper mount, the 'riding' part was a blast.  I hope you keep up the contests.  I need the distraction!

After all of that, you are probably expecting all those pics, but there's too many, and this site has enough bandwidth issues as it is, so I chose 3 pics of Dale's cock or rooster... whatever you want to call it and it's rider! Now... Make sure you don't have any liquid in your mouth! Ta-Daaa!!! 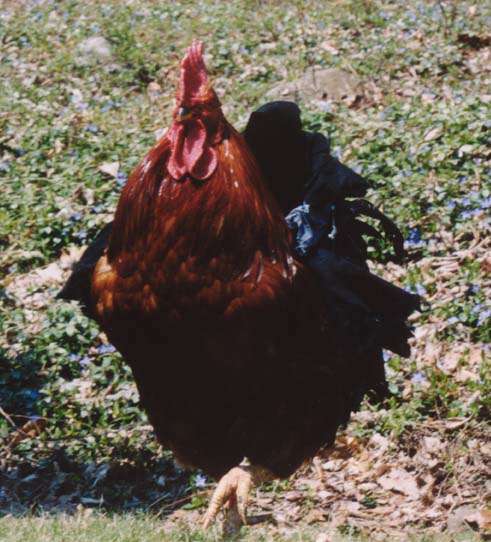 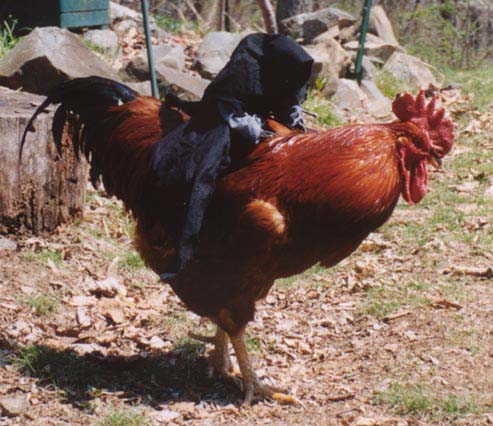 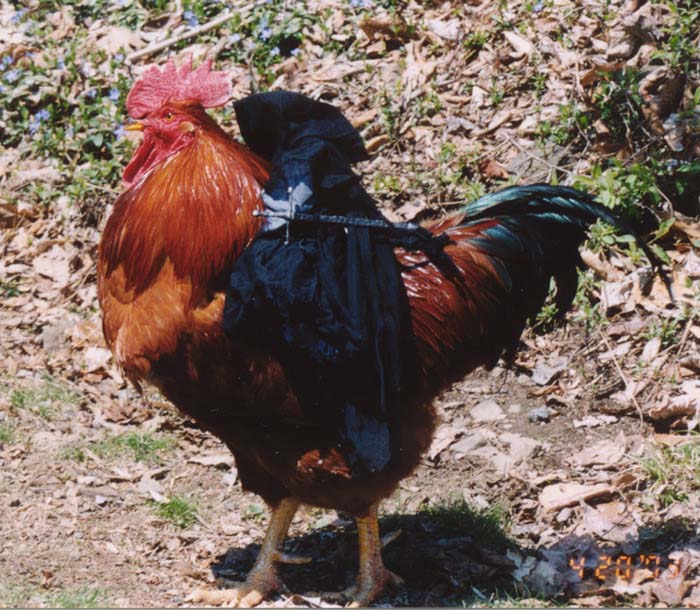 The next contest will be for SideShow / Weta's Stone Trolls Diarama/Statue/Masterpiece.... PLUS - we'll be doing another contest for... The Extra Salty R. Lee Ermey Marine Drill Instructor... Watch for how to win coming soon to the site. You can bet I'm gonna make you do some pretty pathetic stuff for that R. Lee Ermey doll.... Muahahahahahaaaaa!