Dr Curt Connors and Peter Parker photographed... together!!! Behold the one-armed Dr. and THE AMAZING SPIDER-MAN!

Hey folks, Harry here... and look! We got an image of a one-armed future reptillian menace to society, but now... a mild mannered Bio-geneticist-thingamagig! OOOooooOOoooh me want to see LIZARD going after SPIDER-MAN... Me love LIZARD as a character! Here ya go... 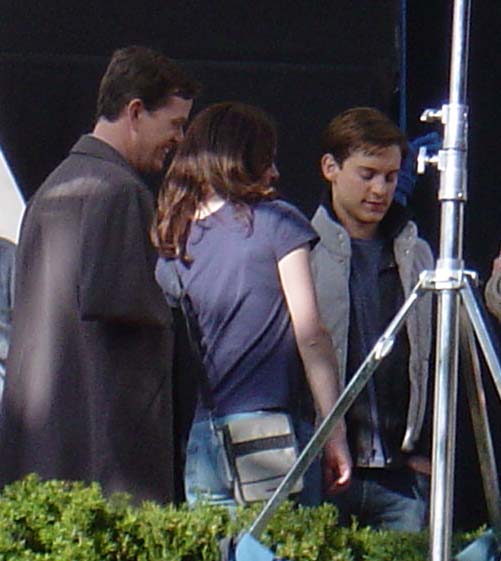 I just got back on campus this morning and saw the filming of Spider-man 2 (that's what was written on the workers' bagdes). Anyway, after running some errands, there were still filming and I decided to take some photographs. I got a bunch of Tobey and Sam Raimi from a bird-eye's view, but am only sending you one of Dylan Baker (Dr. Conners) and Tobey Maguire in between shots. Baker looks like another strong casting choice and it's cool seeing him walk around with only one arm. Anyway, if you want to see the other photos, just e-mail me. Otherwise, here's one Dylan and Tobey,

Here's Johnsnake with a few other details...

They've started shooting scenes for Spiderman 2 here at Columbia they're gonna be here all week. So far they've been shooting minor scenes of tobey maguire running across the campus and the like. Today however, they were shooting right under my window and I saw that they were shooting scenes with Dr. Conners as well as more with Tobey Maguire running for some reason. They're using a couple more buildings for either lab or classroom sets but they're closed. A friend of mine stumbled upon the shooting schedule while searching the underground tunnels of Columbia and discovered a few plot points such as Spidey and MJ hooking up somewhere on campus...That's it for now although there's still a week left of shooting here.

Hey folks, Harry here... this time out we have Tintathar, who reported last time on Parker's wanderings... This time he's got some shooting information for the areas that THE AMAZING SPIDER-MAN will be shooting this coming week! Be a geek, track em down... Let's see what's going on!

Just an update from the second day of shooting. The best description any of the PAs could give me of the scene is that Parker's a student at Columbia, leaving a class, and runs into an unimportant background character. It's apparently scene number 15, which is "a good bit into the film". Tobey is the only star filming today. Kirsten should start shooting around Tuesday, and Alfred is no where to be found this week.

The only really useful bit of information I got was the schedule for the rest of the week: Monday - Wednesday they'll be shooting in Forest Hills, Queens. Thursday they're scheduled to be down in Chinatown.

Hopefully folk will see some cool stuff at those other shoots, as this one has been pretty low key.

Last time we did this, you called me