Harry was so amused by this one that he ordered me to put it up before he stumbled off to pass out, leaving all this morning’s work in my lap. Guess that’s fair, though... I’ve been gone for over a week. It’s been interesting, and I’ll have more details on my trip in the weeks ahead.

In the meantime, here’s a peek at what Tom Savini, everybody’s favorite crazy Vietnam vet makeup artist extraordinaire is up to:

Hi. As you'll remember, I interviewed both Wes Craven and Ian McKellen for your site in the past. Well, now I'm one of the executive producers of an indie horror film called ZOMBIEGEDDON, and I'd like to tell you about an experience I had today...

The primary shoot for the film was near Kansas City this past summer. This weekend the final scenes of the film were shot featuring Tom Savini, Brinke Stevens, and Conrad Brooks. I hate to say it, but I was unable to be in Cleveland where the final scenes were shot. However, I had the chance to see the rough footage from the scenes featuring Savini today, and let me tell you, the man turned in an incredible performance. This is likely to be one of Savini's most memorable roles as he plays... Jesus Christ!

Strange, huh? Well, having been involved with the film every step of the way, let me tell you that it still seems just as strange to me. Without going too much into it, I will say that ZOMBIEGEDDON is likely to tick off the conservative relgious folks quite a bit. Let me just put it this way: the film opens with Jesus having sex with Brinke Stevens. Savini has some very, very funny dialogue in these scenes and he knocks the ball out of the park here delivering a terrific performance. It's definitely his best turn since FROM DUSK TILL DAWN, I might add. Thus far Savini has played a number of memorable characters, but what could be a better role for an actor than Jesus Christ? How do you top that?

I should also point out two relatively unkown actors, Ari Bavel and Paul Darrigo (of WITCHHOUSE 3), who are likely to become genre stars after their convincing turns as bad cops Jeff and Cage.

Screenwriter/Director Chris Watson has done a terrific job creating a wacky, offbeat, extremely-irreverent film with ZOMBIEGEDDON. I guarantee you that this is the strangest entry in the genre in a very long time. The only way it can be described is king of a cross between BAD LIEUTENANT and Romero's "Dead" trilogy. This wacky flick has all kinds of strange shit in it, from zombie-eating tigers to a huge kung-fu battle. As a fan of zombie flicks and Tom Savini myself, let me tell you that I'm as anxious to see the final edit of this film as anyone.

Well, that's enough rambling for me. Thanks for the time and the space, big man.

Harry wasn’t sure if he was having his leg pulled or not, it being April 1st and all, so he wrote back and asked if the guy could verify any of this with, say, a photo. Within the hour, the following showed up in his inbox: 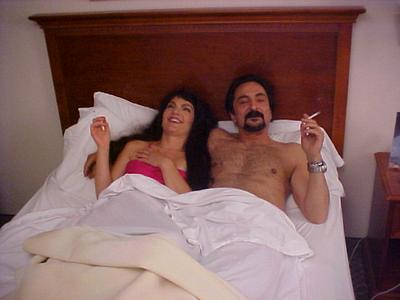 So let’s celebrate the blasphemy in the TalkBack below, eh? Whoo-hoo!