Hey folks, Harry here... This may be a made up poster from a cool as hell magazine in Japan, and it might very well never exist in poster form... and sure Uma's hair isn't blonde on it, and the Kato masked folks don't wear the driving hat, and I don't think there are any plane crashes or cop car crashes in the film, at least not in the last draft I read, but ya know what... THIS POSTER, the one below PERFECTLY captures the spirit of what Tarantino is trying to do with KILL BILL. If you want to hang this poster on the wall, then this movie is for you. If not, it still may be for you, and after you see it, you may want this poster... hehehe... or you may just be a hopeless cause for the film. But I hope not. Here ya go... 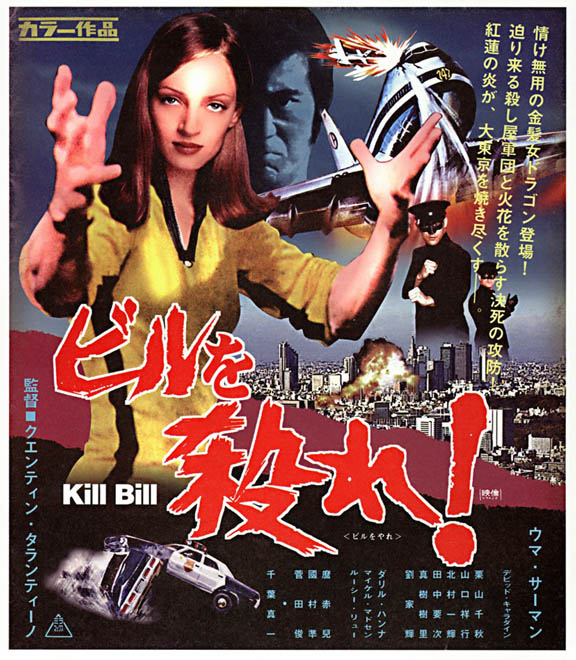 As you guys might have figured, Kill Bill mania is running wild, especially in Japan. After all, Takashi Miike was hanging out on the set. Some left-over miniatures from Godzilla Vs Mecha Godzilla (the new one) were used in the finale. Hotei is rockin’ the teaser. And Bad Azz Mofo Sonny Chiba taught Uma how to get a grip on a katana. This film stands to do for Japanese film what King Kong did for the Empire State Building. The anticipation over there is way feverish right now.

Helping to whet the appetite is the most rockin’ film magazine in the world, called Eiga Hi-Ho (meaning “Movie Treasures”). Imagine Film Threat with Premiere’s production values. Anyway, the graphic designer over there, a mad genius named Baka Yoshiki, cooked up a fake poster for Kill Bill for Hi-Ho’s new section. I thought it was brilliant and wanted to share. Its very much a tribute to the old Toei posters from the early seventies, back when Sonny was packing them in by ripping people’s nuts out. Keep in mind that Yoshiki’s work is only a “what if,” but and if there was any justice in the world, Tarantino would still put this puppy up in every multi-plex on Godzilla’s green earth. Dig it. Bunta out.