Quint Interviews The Star of the Great Horror Film, MAY, here'sssss Angela Bettis!!!

Ahoy squirts! Quint here to make sure all able bodied self respecting film geeks in Austin, TX and Fresno, CA hit the theatres this weekend and support MAY, a smart, character driven horror flick that exploded at Sundance last year and more recently at Sitges (read Harry's gushing review here!) and is getting its first small release starting February 7th. You folks in Austin and Fresno may very well decide the fate of this flick. If Lion's Gate sees a big response this weekend, then the word is they'll release it a little wider (to places like New York and LA), then wider and wider until it's playing across the country. So, it's important for you Fresnoians and Austinites to not put this film off.

I have made no secret of my love for this film. My review was almost as gushing as Harry's, which is no small feat. Click here to read my review.

Anyway, much to my surprise and pleasure I was contacted to interview the star of MAY, the lovely and talented Ms. Angela Bettis. We did a sit down interview and I was happy, if not very surprised, to find out Ms. Bettis is a huge horror geek. She's not only a talented actress, but quite literally one of us. She geeks out over blood and guts and shit just like all us gore-hounds out there. Plus, as you'll read below, she's not afraid of speaking her mind about the bullshit of Hollywood, which always makes for an entertaining discussion.

Without any further adieu, on with the interview! See you folks at the end! 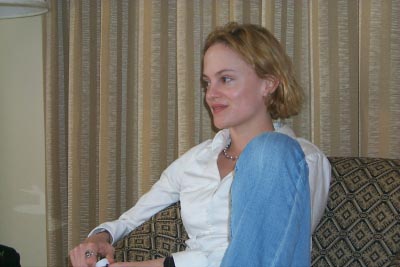 QUINT: How did you get involved with MAY in the first place?

ANGELA BETTIS: In the standard fashion. The truth is I get script after script after bullshit script... Such bad scripts come across my table, as is what happens in LA. Then this little genius jewel of a thing showed up and I just pursued it very avidly. Even though representatives, of course, were all, "Oh my God... It's no money. You shouldn't do it. It's independent. You're never going to blah-blah-blah." I just told them to screw off and it ended up being the right mix. Me and (director) Lucky (McKee) ended up having a good sort of... what's the word? It was just the right mix, I think, chemistry wise. I was excited to do it, so I pursued it much. To me, that looked like the part of a life time.

QUINT: Is that what mainly grabbed you about the script? The character work?

ANGELA BETTIS: Yeah, I read so many scripts that don't even have a character, they're just bullshit lines... I don't even know what to call them. And this one had a truly developed person... personality. It also looked like it was going to challenge me, which is always what I look for. Low and behold it's sort of autobiographical in a way.

ANGELA BETTIS: Well, the character is based on Lucky. It is Lucky, except it's a little chick and he's a tall dude. (laughs)

QUINT: So, Lucky was always going after the mechanic with the perfect hands?

ANGELA BETTIS: Mechanic with the perfect hands... I think it was actually a redhead with freckles. (laughs)

QUINT: MAY went over amazingly well at Butt-Numb-A-Thon and every review I've seen come out of Sitges and Sundance were all glowing. People seem to be really connecting with it. Do you think people identify with May?

ANGELA BETTIS: I think anybody who's human has got to know that feeling. Anybody who is human has got to understand loneliness on some level and it should hit them there if nowhere else, I think. It's kinda what the story's about. 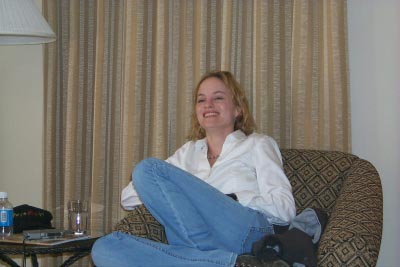 QUINT: I have to know... Is the doll as creepy in real life as it is in the film? (SEAMAN SIDENOTE: HER ANSWER IS FULL OF SPOILERS! SKIP OVER IT IF YOU DON'T WANT TO KNOW! YOU'VE BEEN WARNED)

ANGELA BETTIS: More creepy. She's really creepy, but we ended up destroying her in the, you know, the glass scene with the little kids... when the case falls and she breaks. We destroyed her there. So, they kinda have to remake her 'cause she must live on. (laughs)

QUINT: So, you didn't order it to kill anybody, right?

QUINT: You got a nifty lookin' lazy eye in the flick. How did they create that?

ANGELA BETTIS: Contact. I actually have a lazy eye. So does Lucky. Lucky has a lazy eye just like May's. It's like one of those... If he takes his glasses off... If he has them on, his eyes look normal. He takes his glasses off his eye just slowly goes inward to where you can't even really see the iris, it's so far in. I have a lazy eye, too, but it goes the other direction and he was like, "No! It's gotta go the other way. She's gotta look cross-eyed!" So, we did that. We got a contact. It was, like, a white contact and a color contact on top of that. Hard lenses. Kind of uncomfortable, but...

QUINT: It looks great. It's kinda unsettling when you first see it.

QUINT: Did you have fun with the gore?

ANGELA BETTIS: It's so fucking fun to do that stuff! It's so fun! And it's amazing to watch it 'cause it turns out horrific, but doing it's a blast! Like getting yourself all covered in blood and splerting... That's so much fun.

QUINT: I take it you're a fan of horror films.

ANGELA BETTIS: Absolutely. Always have been.

QUINT: Well, you are Carrie...

ANGELA BETTIS: Oh, yeah. Carrie... Oy! Did you guys see that one?

ANGELA BETTIS: You didn't want to ruin it! (laughs)

QUINT: Nothing against you. I'm sure you're great in it, but... you know... I have the one-sheet of DePalma's film signed by Sissy Spacek up on my wall. I just didn't see the point in redoing the story.

ANGELA BETTIS: Yeah, see... If you loved the DePalma movie, you'd hate (the mini-series). I mean, Lucky hates it. Lucky HATED it. The truth is... If I weren't in it, I wouldn't have watched it. In fact, I would have been one of those people that was like, "Down with Carrie remake on NBC for television!" It's like Carrie meets 90210... But the bonus is I got enough money that I can keep doing things like MAY for no money, which is what I want to do. It's all a balancing act. And I love Stephen King, so...

QUINT: Oh, I'm a huge Stephen King whore! Big time. I could go on about the DARK TOWER series and THE MIST...

QUINT: And the rest of his stuff...

QUINT: So, what're some of your favorite horror flicks?

ANGELA BETTIS: Anything by Dario Argento (SEAMAN SIDENOTE: MY KINDA GAL!), that movie... HENRY: PORTRAIT OF A SERIAL KILLER is probably the scariest thing I've ever seen... or most disturbing, maybe. I love the Jack Nicholson THE SHINING. Those are some examples. I also have to mention that I love Hitchcock. I just have to throw that in there

QUINT: To give a little prestige to the list?

ANGELA BETTIS: But you did a junket for Anna?

QUINT: Yeah... I wanted to know about MAY and plus I think she's gorgeous.

ANGELA BETTIS: She's such a hottie, isn't she?

QUINT: Oh... yes she is. So, she's cute and at that point I knew next to nothing about MAY and she told me that she played an aggressive lesbian in the film. I was like... "Oh... really?"

ANGELA BETTIS: Are you serious! (laughs) She's really sweet. I don't know, there's that thing when you're talking to her you just gotta look at her she's so gorgeous.

QUINT: Is she a good kisser?

ANGELA BETTIS: (without hesitation) Yeah! Yeah, she is. I hope she would say the same about me. Was that the question you asked her? "Hey, Anna..." (laughs)

QUINT: No, I wish I would have talked to you first 'cause then I could have said, "You know, Angela said you were a good kisser, but I'm not sure if I believe her or not..."

ANGELA BETTIS: "So, will you prove it to me?" (laughs)

QUINT: Then I would have gotten slapped and kicked out, but it would have been worth it.

ANGELA BETTIS: I don't know. She might've done it.

QUINT: Dammit!!! So, what're you doing next?

ANGELA BETTIS: Well, I might do... I'm probably not supposed to talk about it, but I will to you guys because you're, like, my favorite. Um... Lucky is doing a movie for United Artists, THE WOODS. I'm trying to get him to hire me for it, which is why I did this (pats her hair). I was trying to make my hair like Harry's because there's this little redheaded character who they call Firecrotch and she's like THE chick. I'm trying to get Lucky to put me in it, but I don't know. He might actually cast, like, a real teenager. So, I don't know. I think he's toying with the idea. We'll see.

So, that one is a hope. Victor Nunez's (ULEE'S GOLD) movie COASTLINES may come out someday, I have no idea. The Carrie thing... They want to turn it into a series, so they just offered me an extension on my contract. I... don't... want to do it because I really, really don't want to sign away my soul to Satan on a television 7 year contract. BUT... I'm sure there's some number that when I hear it "Yes" will just come out of my mouth, whether I think about it or not. If they say that number I'll say yes, if they don't, then I won't. But, I don't know. It might be nice to have a giant, giant nest egg.

So, I don't know. We'll see. I'm really entirely undecided about that. Even if I do do the contract that doesn't mean it'll go. You know how the studios are, I'm sure. It's all up in the air. Those are things on the horizon, but there are no contracts signed, so we'll see.

ANGELA BETTIS: Hm.... I think this is one that everyone has heard, but I like it. It's PASSWORD and the Queen Mother is on the show. It flashes on the bottom "Password is: Donkey Schlong." She gets to ask the 20 questions, right, so she asks (Bettis doing a killer Queen Mother impersonation) "Um... Is it edible?" The panel goes aside and "talk-talk-talk-talk" and they come back and they say, "We've decided that yes, it can be edible." The Queen Mother says, "Is it a donkey schlong?" I like that one. "Is it a donkey schlong?" 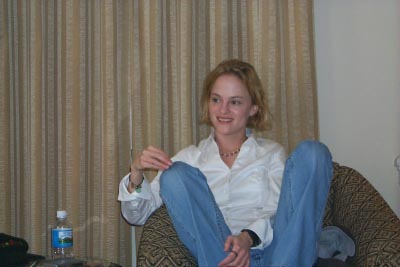 Told you it was a fun interview. For you lucky folks here in Austin and out in Fresno... go out and see this flick! All of us horror geeks are always complaining about unoriginal, bloodless WB cast schlock that's being passed for horror nowadays. Now it's time to ante up and support this great character driven flick.

I'm about to become extremely busy, folks, so keep your eyes on the horizon... I should be pilfering AICN's movie and Coax. board with some coolness in the very near future. 'Til that day, this is Quint bidding you all a fond farewell and adieu.

email: Ms Bettis wanted some of my body parts. Email me here to find out which ones!!! Or if you're Ms Bettis, email me here if you need any more!!!