The Winner of the Grand Flaming Marshmallow Balrog Contest!!!

"Your BALROG confection will be judged on presentation - sculpting and just how well it burns."

Harry here... I had no idea what I was in for by creating a Flaming Marshmallow Balrog Contest to win one of SideShow/Weta's Balrog Statues! I have learned so much about the art of Marshmallow Sculpting, setting it aflame and then photographing it.

There were 78 entries into the Marshmallow Balrog contest - Entrants from Austin to New York to Canada to California to Iowa & Illinois to Sweden to Finland to England to France and places all in between. From individuals to group efforts to even community efforts. Ages ran from 5 years old to 53 years old (eldest admitted age!). Efforts from males and females... all with the hopes of getting that fabulous BALROG statue.

I'm going to show you the 5 finalist and my pick for the winner. I WISH that we had runner-up prizes, and there's a part of me hoping that SideShow/Weta will come through with something for these additional efforts, simply because... Well, I have been in agony trying to decide which deserved to win. The stories behind making these things are truly touching, but... Nowhere in the contest, did I make allowances for the story of how it came to be, but rather "Presentation - Sculpting - Just How Well It Burns!"

In the final decision - it came down to the best sculpted flaming Balrog caught on film. That rectangle of blazing frothy sugary confection. And that made the choosing the ultimate winner easier, if not still ultimately aggravating. The decision was reached in consol with Father Geek and myself.

At number 5 came Dale Hwang from Flemington, New Jersey. His Marshmallow Balrog was 15" tall with a wingspan of about 4 feet. He made a wire frame covered with home made marshmallow piped on while tepid, which he learned to make from a recipe on Foodtv.Com called "Indoor Smores". He colored his Marshmallow Balrog with powdered pigments and overall - the sculpture is exceptional. The best sculpted full body Balrog we got. However, he never really did get it to flame particularly well, and the photos taken are notably non-dramatic. So one of the 3 criteria met wonderfully, but points off for the other two. 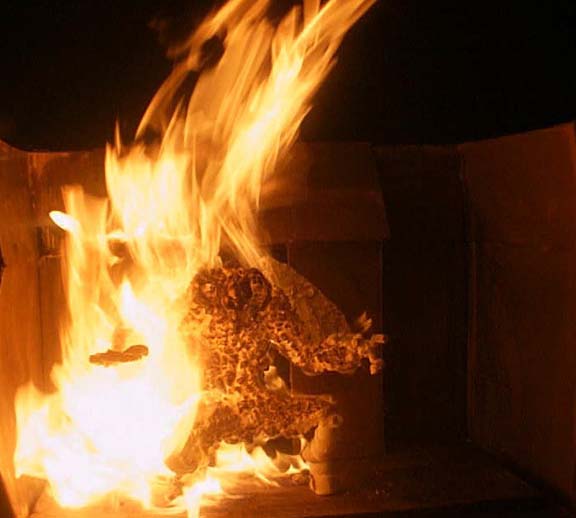 Number 4 came from Rome, New York and belonged to Brian Kucharek. I have no idea of actual dimensions for the beast, but he looks like he's probably around the 15" range. Here his dramatic flames are excellent. The picture is dramatic, but the sculpting leaves a bit to be desired. Very nice work. 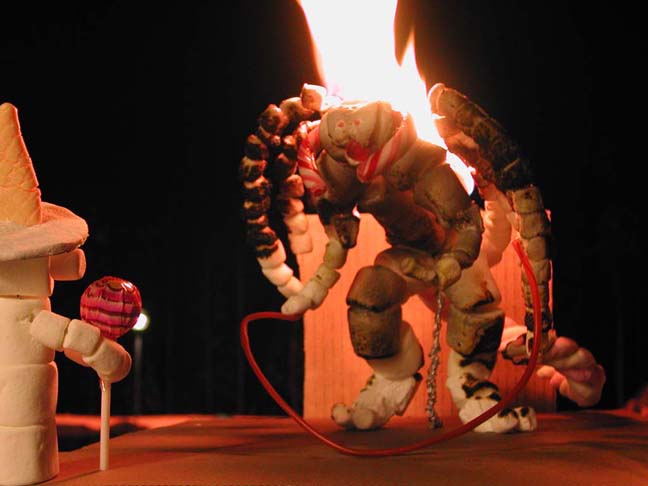 Number 3 came all the way from Sweden and the funny as hell sculpting talents of Henric Bolin. Here - Henric presents a wonderful scene with not only a Marshmallow Balrog, but a Marshmallow Gandalf with Cookie Hat and Chypa Chups Staff. There's something utterly hilarious about the Candy Cane Horns that just makes me giggle completely. They had a better flame shot, but in that photo so much of the detail was lost that you couldn't fully appreciate the comedy of the "lighter" shot. The comedy aspect of this picture really nearly made it the winner of the contest. 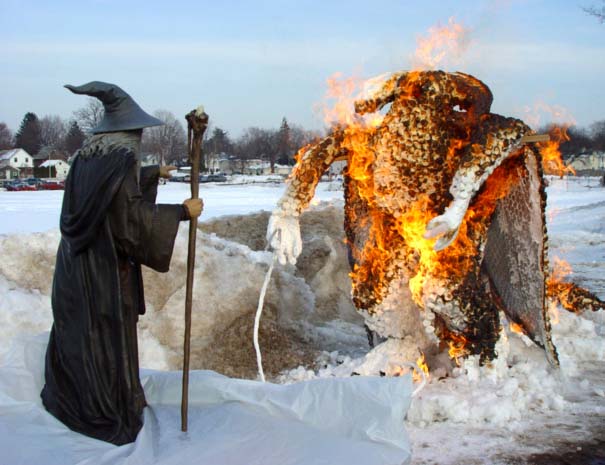 At Number 2 came a rather remarkable story and creation. This 5 ft tall, humanoid size Balrog was the creation of the Tolkien Society of East Rochester High School. Here's their letter the sent:

Here's our entry in the Balrog contest. I'm the faculty advisor for our Tolkien Society here at East Rochester High School, and a regular visitor to your site. When I first read about the contest I laughed out loud and thought "who would be crazy enough to do this"? Then I thought a little longer and said "well, we could be crazy enough to do this". The more I thought about it, the more it sounded like a lot of fun, so I called a meeting & the kids were way into it. That was 3 weeks ago, and they've been working on it ever since. I started the club last year & we've had a lot of fun, including two trips to Toronto for the LOTR exhibits up there.

After lots of brainstorming, trial and error, we wound up with a 5-foot-tall Balrog constructed of chicken wire & tin foil, covered in marshmallows (large & small) and marshmallow fluff. His eyes are butterscotch candies. We used an entire roll of chicken wire, several rolls of foil, 11 tubs of Fluff (note: microwaving one minute makes it nice & fluid and easy to spread, two minutes makes it explode all over everything and smell really foul), 38 bags of marshmallows and the efforts of a dozen students and 2 adults. I took pictures of the whole process, which you can see at The Official East Rochester High School Tolkien Society Website!

At the last minute, our superintendent got in on it and insisted that the fire department be present for the torching, so we decided to make an event out of it & invite the school. We wound up with about 75 kids, a dozen teachers and 5 firemen to witness our madness. It was a blast!! I already had the Sideshow Gandalf the Grey, so we decided to include him in the photos. We used a little forced perspective to make him more proportional. Since it has snowed every day in January, we figured we'd try to replicate the mountaintop fight setting. At some point I'll Photoshop out the neighborhood in the background?

I hope we win ? the kids worked really hard at this, but in any case we had a lot of fun. Thanks for the great opportunity & nutty ideas. Now what will we have to do to win that Ringwraith?

A great story. A community effort. And if you check out their website you'll see pure Americana at work. The site of Firemen turning the hose on a flaming 5ft tall Balrog made of Marshmallow while the entire school looks on... Well, there is something magic there. Their photo was very nice. Unlike the other images we've seen thus far... the flames are proportionate to the creature, the use of forced perspective is very nice... But had this shot taken place at night... for Dramatic lighting, it might very well have won. The effort is to be applauded, and if I had 2 awards, this would get the second one. And I hope they go all out for the Ring Wraith Statue on Steed that will be the next fabulous contest!

A fellow known to his Elementary students as Mr Jones. An elementary school art teacher in Far North Austin, Texas. He nailed it. His name is Gordon Jones and the sculpture he made of this creature of shadow and fire and marshmallow... is something to behold. The picture is so nice, I actually have it as my desktop at the moment.

Instead of trying to capture a statue size Balrog - or even a full body Balrog, he knew that the medium of marshmallow and the volatile nature of fire meant that he should concentrate on the head and neck of the Balrog. At nearly 5 ft in length and 3 ft across, this head looks massive. He created a chicken wire armature which he filled with hundreds of wadded newspaper balls. He then used a variety of different sized Marshmallows and paying attention to the segmented nature, used them to create patterns not unlike those found in the original CGI Balrog. He then had a melted vat of marshmallow stew which he used to create a smoother skin atop the marshmallows, to give it that correct look.

With the glowing eyes and glowing mouth, and the Balrog burning from within, the main of fire raging in correct proportion to the head, the dramatic lighting. This is a photo that denotes a high skill of sculpting, a wonderment of presentation and it burns from within like that Maea of the ancient world of Morgoth. Oh... you want to see it? and hear from Gordon himself? Here you go...

Here are some pictures of the molten treat from Moria that I baked. The bust is approximately 4 1/2 feet long by 3 feet wide. It is made from chicken wire, or "poultry netting" as it is now known in certain circles, stuffed with newspaper balls and covered with various sizes of marshmallows.

As an added bonus, I was able to melt a vat of marshmallow stew to to better baste my Balrog for added flavor. Spray paint created the illusion of an ashen complexion. I was quite excited by just how flammable my concoction was. It ignited with the first match. I actually thought that I might need lighter fluid, but I did not. Anyway, I hope that you enjoy the visual dessert that I am serving to you. Thanks for watching. 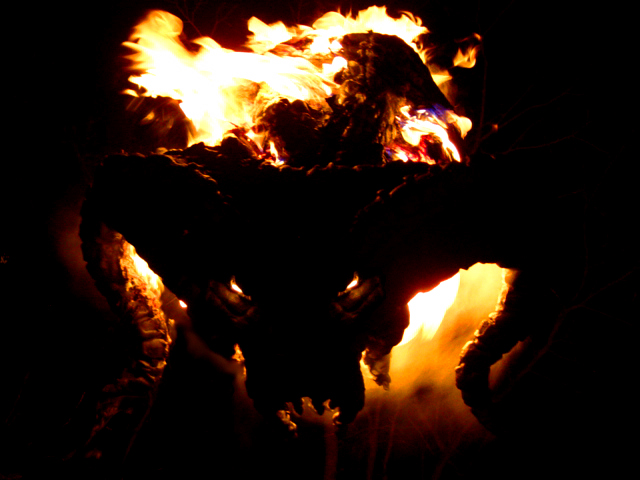 It will take me a few days to go through the Zanti Ants stories before choosing a winner, there's a lot of them. Till the next contest... Adieu... 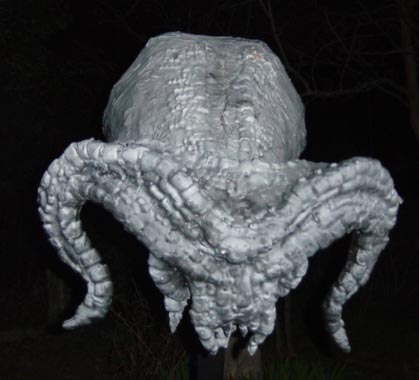 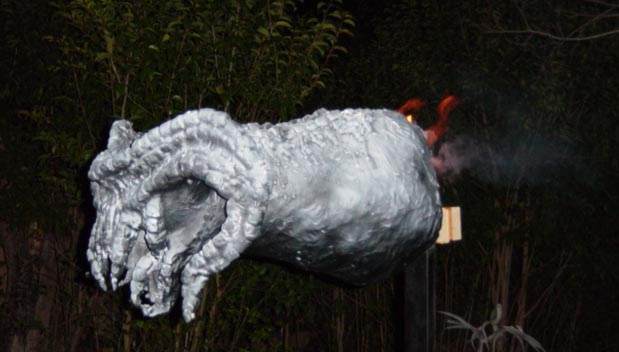 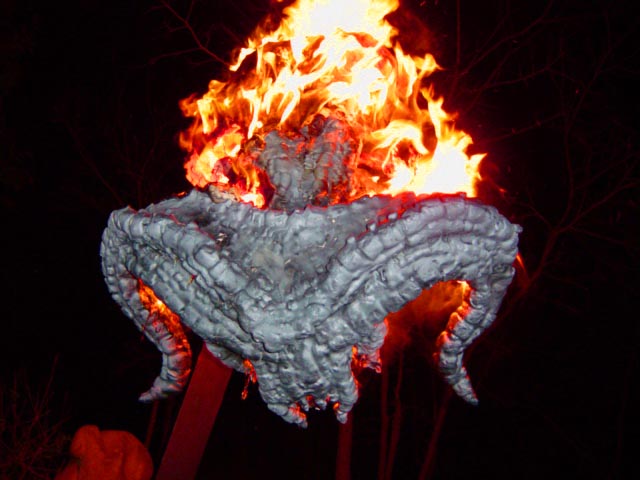 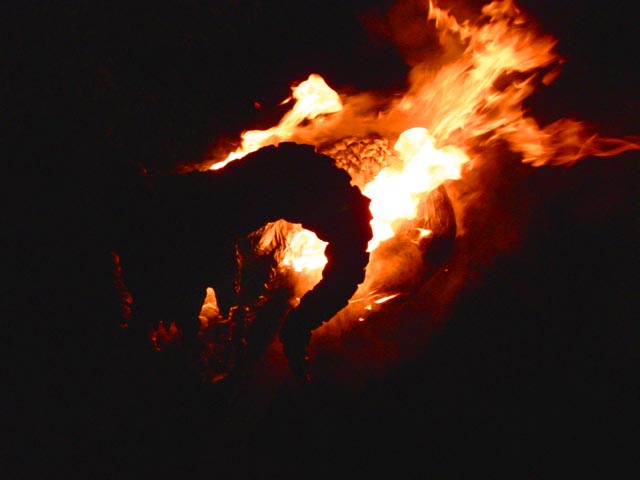