Oh, I could give you a laundry list of reasons why I hate him, but you don’t want to hear that. You want to hear about BAD SANTA. I mean, I think you do. I sure as hell did when he called to laugh and me and mock me for not going to the screening with him.

Let’s see... Coen Bros. producing... Terry Zwigoff directing... and a cast that sounds completely demented in a film that just plain hates Christmas. Has someone been looking inside my head again?

It’s a snow globe scene yanked out of the booze-addled imagination of Charles Bukowski; a department store Santa bent over in a back alley by a dumpster, vomiting up an evening’s excessive liquor intake. Thus begins BAD SANTA, a gleefully offensive Christmas film teeming with contempt for the holiday’s crass commercialization and humanity in general. Bumped all the way from December 2002 in favor of a fourth quarter 2003 release, this Dimension Films production, produced by Joel & Ethan Coen (who also dreamt up this sordid story), is as funny as any movie I saw last year, and seems likely to raise more hackles than that 80’s Yuletide classic, SILENT NIGHT, DEADLY NIGHT.

In that film, Santa was *just* a serial killer; here, however, he’s a drunken, chain-smoking, safe-cracking sex maniac without an ounce of respect for himself or anyone else. In other words, it’s a role Billy Bob Thornton was born to play. And he is caustically brilliant as Willie T. Soke, a bottom-feeding thief cum department store Santa who, with the aid of his helper elf, Marcus (the very funny Tony Cox), knocks off a shopping mall every Christmas Eve, living off of (i.e. squandering) his take until the next year’s holiday season rolls around, at which point the duo reassemble and case the joint from the inside for a whole month as employees.

The catch, of course, is that Willie has to play Santa, a role for which he couldn’t be more ill-suited. Essentially, Willie is a coarse variation on the department store St. Nick from A CHRISTMAS STORY, the chief differences being his astonishingly profane vocabulary, and his penchant for guzzling himself into a deep, drunken stupor where he wets his *own* lap. This places a madly disproportionate share of the burden on Marcus, an easily aggravated cuckold beholden to his high-maintenance, status-hungry wife (Lauren Tom, in another instance of perfect casting). And though Marcus does his best to keep the constantly inebriated Willie on track, there’s no quenching this misanthrope’s boundless thirst for booze and tail, which leaves their scam forever teetering on the edge of failure, especially when Willie’s untoward behavior – including quickies with fat women in the Big and Tall dressing rooms – draws the attention of the mall manager, (John Ritter), who eventually enlists the assistance of his sleazy store detective (Bernie Mac) to dig up dirt on the pair so he can fire them.

In the midst of all this ugliness, we’re introduced to a damaged, friendless ten-year old (Brett Kelly) who attaches himself to Willie’s 100 Proof Santa. Initially annoyed with the chubby, peculiar youth (basically a living, breathing version of Ralph Wiggum from THE SIMPSONS), Willie suddenly finds the kid useful when he drives him home to his large suburban house, where, absent a mother and father (deceased and jailed respectively), he lives under the “care” of his senile, sandwich-making grandmother (Cloris Leachman). At first, Willie is content to simply empty the father’s safe and steal his car, but when he goes home one night to find his motel room getting tossed by the authorities, he decides to move in for the duration of his holiday stay, thus delighting the inquisitive kid to no end, and providing Willie with a perfect safe haven out of which to operate.

The set-up here should be fairly transparent – at some point, Willie is going to learn the true meaning of Christmas – but Terry Zwigoff, following up his impressive fictional film debut, GHOST WORLD, pulls not a single punch. Working from a script by the writing duo of John Requa and Glenn Ficarra (writers of the innocuous CATS & DOGS), Zwigoff is on familiar turf skewering our consumer-mad society, but this time he’s been handed a far more damaging weapon. And, man, is BAD SANTA unremitting in its savagery. Even when Willie finds his conscience, his way of giving back to this trusting child is as wrong as every other act he’s committed. That he feels good about it isn’t at all heartwarming; he’s simply turning a corner into another realm of amoral behavior. It’s this kind of consistency in Willie’s character that renders the film a tad repetitive down the stretch, but once the film clicks into its final, uproarious act, this brief narrative lethargy is easily forgiven.

Solid though Zwigoff and company are, this is really Billy Bob’s show, and his Willie is a perfect mix of misery and fecklessness. It’s a combination we’ve not yet seen from Thornton. I particularly love the way he’s able to subtly alternate his gaze from simply blank and drunken to blank, drunken and dangerously lascivious. Sometimes, before surrendering (far too freely, of course) to his basest carnal desires, he doesn’t even bother to feign interest, like when he’s being hit on by a cute, perky, Santa-obsessed barmaid (Lauren Graham). Apparently, when it falls right into his lap, he can’t be bothered to switch on what limited charm he has (which consists mostly of suffing a $5 winning scratch-off lottery ticket into a stripper’s g-string).

I am hopeful that BAD SANTA’s move to 2003 is not indicative of some internal vote of no confidence at Dimension. After all, we’re well aware of the Weinsteins’ predilection for shelving films that aren’t absurdly easy to market (and, then, shelving a select few that are). Yes, Terry Zwigoff’s film is going to piss off a helluva lot of people, but there is an audience out there primed for something this mean and tasteless. Just don’t repeat MGM’s mistake of dumping the Farrelly’s KINGPIN, only to watch it become a valuable catalogue title that could’ve raked in a tidy profit in the theaters had it been sold correctly, or, at least, competently. BAD SANTA is *that* relentlessly funny, but with a biting sense of satire that could garner a good deal of critical praise, as well.

No matter its eventual fate, do yourself a favor and keep this one fixed on your radar. As for me... between this and CITY OF GOD, I can’t remember when my filmgoing year has gotten off this promising a start. 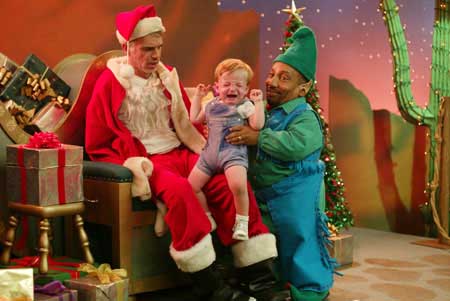 There was a time where I was lamenting the fact that Bill Murray dropped out of playing the lead in this film, and part of me still wishes he would take great roles like this, but it sounds like a home run, and if anyone’s missing out here, it’s Bill. Christmas can’t come quickly enough for me now...