Hey Folks, SAURON Here!!! Let Me Put Things In Perspective For You!!!

Hey folks, Harry here... it isn't often that you get contacted by Sauron... but as I stared at my chocolate truffle candle flame suddenly the lidless eye opened and sent this to me... To prove it... he gave me a nifty ring of power of my own... this is one of those weaker powered jobbies and soon I'll be his slave and help him to enslave all of our world in a third veil of darkness... but more on that later... For now... The master speaks... YOU HAD BETTER LISTEN!!!!!! 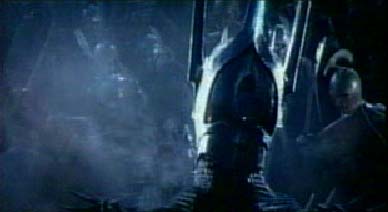 Good evening, mortals, I'd like to introduce myself. I'm Sauron,the Lord of the Rings.

Caught the title, did you? I should expect so. Most of you idiots might remember the title to the movie with Frodo, Legolas, and/or Aragorn in it. Which is why we're going to have a little conversation.

*I* am the Lord of the Rings. Not some midget with hairy feet and blue eyes the size of saucer plates. Not some pretty boy with pointy ears and a blond wig. Not some loser king-turned-ranger-turned-king badly in need of a haircut and a shave. Me. Sauron. The Deceiver. The real honest-to-Tolkien Lord of the Rings.

I don't mean to complain. I'm glad you came to see my movie. But you seem to have lost focus. The bloody movie is named after ME!! It's not "Midget Carrying A Ring," or "Cute Elf Boy," or "Sexy Ranger." It's "Lord of the Rings." If it was about one of the above, I'm sure they would hav e renamed it to "The Ringbearer," or some other flowery title.

I am *sick* and *tired* of you little fangirls (and a few of the fanboys) going on about how cute Frodo was. Or how hot Legolas was. Or how sexy Aragorn was. Are they the real stars of the movie? No. I am. Without *me*, there would be no movie!!

Without a doubt, *I* am the most important character in the movie. Middle Earth depends on me to oppress it and wreak havoc and evil. Do you have any idea how hard it is to corrupt, taint, destroy, and ruin *everything* you touch? It's not easy, let me tell you. It's hard work being an overlord of evil! I have all these evil plans to concoct, and there's a lot of appearances to be made. I hardly get any sleep, what with having to keep an eye out for everything those idiots do to try and thwart me.

But do I have any fangirls? Do I have ridiculous girls who collect images of m e, and devote entire shrines to how sexy I am? Do I get any appreciation? No. I am unloved, uncared for, and in the end, I have to die, just to make the heroes look good. Would you even appreciate Frodo completely if it weren't for *my* ring? Would you like Legolas so much if I didn't provide his targets for him to show off with a bow? Would you think Aragorn was so sexy if he never had to draw his sword and fight off my minions? Would you have liked the movie as much if I didn't arrange for the dramatic deaths of at least two characters? If it weren't for me, there'd be no movie.

Now, I know I don't have a pretty face and long, blond hair. Or big blue eyes and a sensitive face. Or smoldering green eyes and classic good looks. But a little appreciation would be nice. What about my lidless eye, wreathed in flames, eh? Now that's cool.Does Frodo have a lidless eye wreathed in flames? I think not. Hell, he can barely keep his eyes symmetrical without photo manipulation. And what about my cool metal suit of armor? Does Legolas have a suit of intimidating armor? No, he doesn't.

All he has is some frippy Elf clothing, and stupid braids. And he walks like a girl. And what about my piece d' resistance? The One Ring? Does Aragorn have the One Ring at any point of the movie? No, he's so scared of it, he sends off the little hobbit like a coward. And he spends more time touching Legolas and Boromir in that movie than Arwen. (Wonder what *that's* all about, eh?)

Obviously, I have some interesting qualities I feel are overlooked.All you fangirls (and fanboys) need to stop drooling after Frodo, Legolas, and Aragorn. Stop it with the obsession!! You're losing focus for the movie!! Do you think Tolkien created those characters so you could chase after them in your sexual fantasies? I think not. The old bastard w as way too interested in cross-dressing women to create male fantasies for you. *I* am the star of the show. And I want to be loved for what I am, and what I do!! 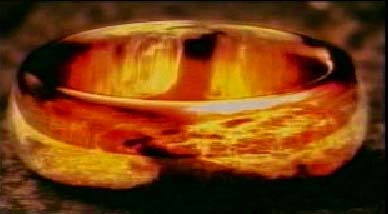 I mean, look at yourselves. Just *look* at what you've turned into.Instead of appreciating the film, the books, or even the important message behind the story (don't steal other people's jewelry),you chase after the male characters in the story. I've even seen shrines to Boromir. Boromir!! He bloody well died, you know!! The loser practically tried to rip Frodo limb-from-limb to get the ring, and yet, you appreciate *him*, just because he tried to save those idiots, Merry and Pippin. The fools got everyone in trouble more times than *I* did in the film, and you still like *them*. I barely had to do *any* evil in the first movie. Pippin was doing a rather nice job of it all by himself.

Take the scribe of my message, J. Marie, for inst ance. The fool girl has a shrine to naked Viggo Mortenson pictures on her hard drive. Now that's sad. She has filled up folders of precious memory with pictures of Orlando Bloom. She's wasted countless hours agonizing over writing fanfiction (about Aragorn and Legolas, no less). She's seen the movie *six* times, with no end in sight as of this writing, simply so she can drool over Aragorn and Legolas. It's pathetic, I tell you.

Where are my shrines? Why does she go to the bathroom during the parts of the movie before Aragorn shows up? Why does she concern herself with the pizza grease on her hands during *my* scenes, yet didn't even notice her brother spilling Pepsi all over her pants when Aragorn was fighting the Nazgul? It's unfair.

She'll quote you *Gollum* before she can mention anything that I have done to make this film great. She just shrugs and tells all her friends she hopes Aragorn gets a nude scene in the next movie!! How degrading!!

And where were *my* Oscar nominations?? Nobody would care about Gandalf if it weren't for *me*!! He'd be nothing without *me* to define him!! It's an injustice!!!

And don't even get me started on the fanfiction. Where's my sex scenes? (I'm a lover, not a fighter, you know.) My thoughts and angst?? Where's my slash moments (I personally think that Gandalf and I need to get the hook-up), or the times when I kidnap Arwen from Aragorn? Where's the Mary Sues that try to get *me* to marry them? I'll have you know I have some very nice love poetry stored up for just that occasion. It's always about Aragorn, Legolas, or Frodo!!

I'm asking for some focus here. For people to recognize that the Lord of the Rings is about ME. The Lord of the Rings. Not the ranger who needs to shave. Not the Elf who looks like a girl at a distance. And c ertainly not some computer-midget-ized hobbit with eyes too big for his face. I'll get him. And his little dog, too.

I *demand* equal rights. I want web shrines, folders full of images of me on your hard drive, people paying eight bucks a pop just to see *me* on screen repeatedly, fanfiction, love scenes, Mary Sue fics, grand kidnapping the damsel scenes, horrific storylines, and angst-filled stories!! I *am* the Lord of the Rings!! It's all about ME!! ME!!! MEEEEEEEEEE!!!!

I need to go take my medication now.

Has anyone seen my teddy bear, Mr. Wuggles? I want to go sleepies now...