A Report From The Tiger Girl Of The East About The Set Of KILL BILL!!!

Harry here... Man, the KILL BILL news seems to be pouring in... Here are the details from a scene, that one day in 2003 you'll look at... eyes glazed over, drool pouring out of your mouth like a waterfall. Followed by much noise and merriment. Yousa gonna lose your mind. Now prepare for some cool as hell sounding stuff!

Hi Guys, Tiger Girl of the East back once more with my Kill Bill experience wrap up.

I'm going to keep this spoiler free, but since Harry you've seen the script you will know the event which caps our shoot.

I was recently an extra in the House of Blue Leaves segment. We spent a week filming and let me say that from what we've seen this film is going to be something special, certainly not Pulp Fiction 2 or a rehash of Quentin's earlier work. The scenes we shot were almost entirely dialogue free, and the dialogue we did hear was in Japanese (from Uma).

The House of Blue Leaves itself is an absolutely amazing set, it's a large 2 story Japanese rest with a huge open central dance floor of clear lucite over a Japese sand/rock garden, the side have small tables with one wall taken up by a long bar and the other wall having recessed Japanse style dining areas (patron sit on the floor before low tables). At the head of the room is a large stage flanked by 2 wooden stairways leading to the second level which is estentially a long balcony circleing the room with sliding doors leading to private dining areas. The whole room is about Fifty yards long by twenty yards wide, and even features a complete bathroom mockup with sinks and toilets in every stall, this set if built in America would have run close to $1 million, but here in Beijing it was probably closer to 1/2 that.

Basically over the week we filmed Lucy Liu (O'ren ishii) and her gang (the Crazy 88's) entering the rest while waiters and waitresses seved patrons at the tables and a floor full of people dance the the Japanese Girl Punk Band The 5,6,7,8's (who are featured prominately) in the film. 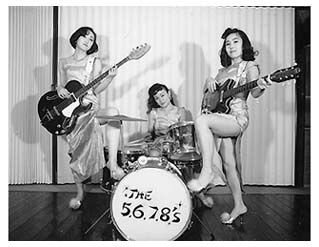 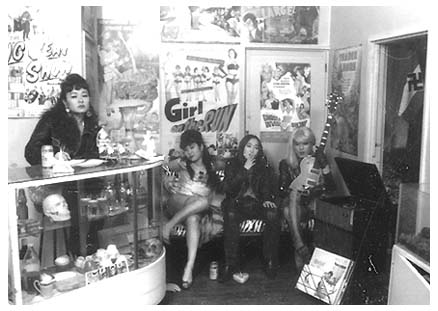 And here is their Discography!! With some Real Audio tracks so you can hear WHY Quentin has them in this movie!

Lucy and the 88's enter, cross the floor and ascend a stair to a private room while being guided/fawned over by the HBL's hostess and maitre'd. After they have gone Uma's Bride character arrives and spies a bit on them, (resulting in the only wire work we got to watch, as The Bride jumps and clings to the rafters to avoid being seen.) After this Uma, openly challenges O'ren ishii (Lucy Liu) while holding one of her gang at swordpoint, culminating in a shocking act of violence that puts to rest any question as to just how gory this film is going to be.

I don't want to give away much as this film really promises to be both cool and surprising, but I can say that Quentin (who is extremely nice and easy going on set) directs as if he has already seen this film, and there is one long (5 min) steadycam shot without a single cut that took awhile to get but should look cool as hell on screen.

I can also confirm that Gordon "7 MAN ARMY" Liu is in the movie, as is Aki Maeda (from Battle Royale and the 90's Gamera films) as GoGo of the Crazy 88's. The rest of the 88's will be pretty familiar to anyone who's up on Japanese movies or TV.

From everyone involved comes the feeling that this film is something special and close to Quentin's heart. I am only sad that we all have to wait over a year (Oct '03) to see for ourselves,

Tiger Girl of the East