AICN's Patch lends her one-eyed gaze to FELLOWSHIP OF THE RING!!!

Hey there folks, I figure I have to post one fresh LORD OF THE RINGS top story here, as this is the day. The day where so many of you out there see the end to your wait. I figured that I would also take this time to introduce you to a new spy here at Geek Headquarters. When she came into the AICN fold, folks just called her "One-Eye," but personally I took a liking to calling her "Patch"! Patch has been in High School for years now, still is, constantly skipping class, missing school and devoting hours of her young life to the utter worship of celluloid.

The first time I met her was actually a tragic encounter. She was just thirteen at the time. Her interest in film was far advanced at the time, and she figured if that ho in California could fool Rob Lowe, she could fool ticket takers at all night gore fests. She managed to get into this grindhouse theater that me and the AICN crew were taking over for the night, when in the midst of Savini's greatest glory in DAWN OF THE DEAD, she had to get closer to the film. She rushed up to the projection window at the back of the theater and pressed her left eye to the lens, wanting the images of zombie mutilation to imprint forever directly into her brain with the searing arc lamp power of the greatest light of all... projector light. Like Icarus, she ventured too close to the source of all light, and lost the use of her left eye forever.

We'll call it a youthful indiscretion. She's going to be interning here at AICN now, it's my attempt to help her to not only finally escape High School, but also to lend a bit of badass femme influence to this site of ours. I hope you enjoy this her first try at things. You'll be seeing quite a bit of this young bad girl from here on out, and that is cool. Also, Cartuna took a picture of Patch at Butt-Numb-A-Thon 3 this year, I've included it below for your viewing pleasure!

Hello all, Patch here and today I’m coming to you for my first time and I’m devastated, on the verge of tears actually because I have something in me which needs to be out there privy to all of your cumulative eyes and yet I don’t feel I’m ready to share. You see on Thursday I saw FELLOWSHIP OF THE RING and now I’m in a tough place, being forced to try and explain or interpret how it made me feel, how it moved me and well, I’m at a loss, not for emotions but for words that could come close to describing them.

I have been given this task by Harry, it was my ticket in, "You see LORD OF THE RINGS, you write," so I had know this part of the bargain for about a month now and had been fretting ever since. I not only had to worry about loving the movie but also about telling all of you why. So in some respects I knew what I was stepping into. Peter Jackson however has complicated this situation further by giving me an experience that words fail. During that three hour I wasn’t thinking, analyzing, or criticizing, I was loving.

I want to cry now because I cried then, when about half way through the film in Rivendell, I realized that every hope I had about how things would be transformed with this movie came true. I’ve seen something too good to be true. This changes things.

From the instant the New Line logo graced the screen and I had finished, out of sheer excitement, squeezing the arms of my companions Harry and Quint, the film had me and even now, days later, it still does.

The film begins, an epic scene of war with thousands of soldiers fighting and dying, swooping over the landscape we see soldiers being pushed from high up cliffs to their deaths and in the midst of it all is Sauron. Wow he looks great, unearthly thin and tall, all flame and cold metal, scary, very scary. He is the dark lord and one look at him shows how much power and danger the one ring holds. The metalwork here and through out the entire movie is breathtaking. It exemplifies what makes this view of Middle-earth so real, these aren’t props but the real deal and that adds an element, a depth that permeates every frame from beginning to end. WETA your hard work has paid off ten fold, good job guys.

Then from the darkest shadow of Mt. Doom into the Shire we go, and are introduced to Frodo and Gandalf. In this tiny first bit of them together riding along in Gandalf’s cart, the most important and telling features of them both are seen. Elijah Wood’s beautiful swimming pool blue eyes just kill me. Looking at him in this instant he is Frodo, innocent, curious, and armed with those eyes offering a lethal gaze full of pain and hope. Gandalf probably more than any other character had a very distinct look in my mind’s eye and Ian McKellen hits it on the head. His seriousness, his humor, and most importantly his love and dedication to the Baggins‚ is so critically important and he gets it all right, not to mention looking so perfectly natural in that tall hat and long beard; he, like Wood, is the total embodiment of his character. He is every bit father, friend, and mentor that Gandalf is. While Wood and McKellen are the obvious leads, FELLOWSHIP has a marvelous ensemble of actors without whom the film as a whole would have failed.

Ian Holm as Bilbo Baggins is both scary and sad; his grappling with the ring and its addictive power is masterfully done. The addiction trying to be contained, concealed within leaks out in his fiendish face and hands, for his precious is real and strong. Holm wears the burden of guilt at relinquishing the ring to Frodo as a curse haunting every crease in Bilbo’s aging face.

Sean Astin as Samwise Gamgee is so loving, and dedicated not only to Frodo but also to Gandalf and promises he made to the wizard. Sam is the real heart breaker for me because he is so endlessly devoted to Frodo, it brought me to tears. I wait with baited breath to see Astin excel further as the role evolves because he has so overwhelmingly exceeded every expectation I had.

Billy Boyd and Dominic Monaghan as Pippin and Merry manage to succeed at a task so often failed, being funny and mischievous without paying for those characteristics with brain cells.

Christopher Lee as Saruman, it is not only so fantastic to see Lee on the big screen again where he belongs, but he just oozes corruption and villainy. His stand-offs with McKellen are perfectly matched and carry the weight of not only a friendship but of Middle-earth in their outcome, every action carries a weight with it.

Viggo Mortensen as Aragorn and Sean Bean as Boromir not only must serve the Fellowship but are also burdened with holding the fate of man in their hands. Mortensen’s angst comes streaming out of his razor sharp eyes, while Bean carries this weight with his whole body, heavy with death, war weary and desperate.

Orlando Bloom as Legolas and John Rhys-Davies as Gimli are part of the Fellowship much in the same way that Pippin and Merry are, in that they are part of that rock hard supporting cast. These two really make their biggest mark on the battlefield each using their originality and style to fight for their joint cause. Archery and axe play look so good here, Bloom and Rhys-Davies both battle with experience and finesse, there is an art to the way they kill, and it is beautiful.

Andy Serkis combined with the abilities of WETA to create the delightfully slimy Gollum. Little more than his hands and cat-like reflective eyes are seen close up but that voice echoing through caves sends chills up my spine. Man, Gollum just rocks, he is perfect, I want more now.

Lurtz, the head of the Uruk-Hai, a character not of literary creation is a wonder to behold. From his massive physical form and coloring, to his brutality I found him capturing my one green eye every time he graced the screen. This, mind you, includes while in frame with Chris Lee, I have never seen anything like Lurtz and he grabbed me.

New Zealand and WETA have added something most critical to the film in the form of set design and scenery. FELLOWSHIP is a work of art displaying both the natural beauty of the country but of some of the most heavenly sets I’ve ever seen. The mere sight of Rivendell and Lothlorien alone would make this worth watching. The detail and depth to every shot is breathtaking, and is as important and stunning as any other performance. I am totally sold on NZ, calculating how much a plane trip from Austin to Auckland is, I am head over heels in love. Peter Jackson is doing what he always has, making movies the way he wants to make them, straight from his brain to ours, and this is what makes the difference, makes FELLOWSHIP the brilliant film that it is. Peter knows THE LORD OF THE RINGS and let nothing prevent his vision from being fully realized. The film plays like a dream because it is his dream of what FELLOWSHIP could and should be.

Until, Wednesday I’m dying, thinking about it more and more each minute, I have become a nuisance to those around me who have yet to see it because they can’t understand what is about to hit them. For it is all consuming in the best way. However, I have full faith that if they, and you ride out the frenzy you’ll be converted, made believers. FELLOWSHIP is so exciting because it has the power to do what STAR WARS did in 1977, to change the face of cinema and inspire a new generation of filmmakers and audiences. This is the power of film at its finest to inspire, move, and dream, and LORD OF THE RINGS is filmmaking at its finest.

Quite simply there has never been a film like LORD OF THE RINGS.

They call me One Eye, but you can call me Patch 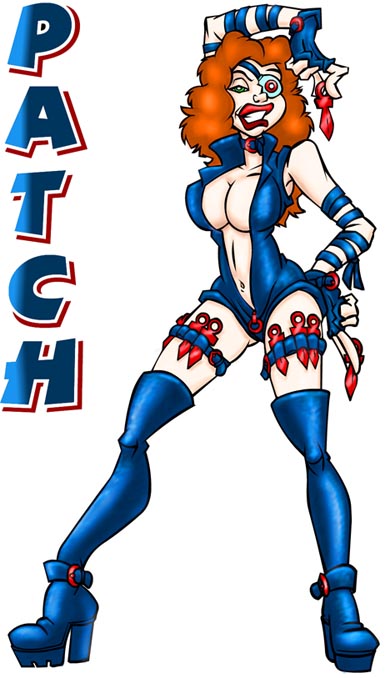