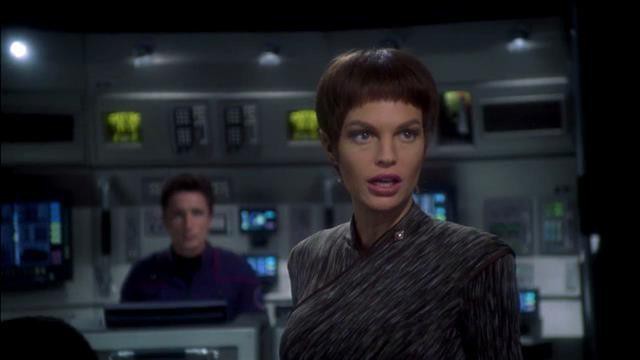 Who cares what Herc thinks! What does The Hollywood Reporter say?

“It's another milestone from the network and production team with their hands firmly on the tiller of the ‘Star Trek’ franchise. The debut episode of ‘Enterprise’ should bring a wide smile of delight to fans and even casual viewers of the galactic adventure epics. This fifth TV series in the late Gene Roddenberry's universe warps in with the kind of excitement, discovery and dramatic conflict perhaps not seen since the classic ‘Trek’ materialized back in the '60s. Production values, direction (credit James L. Conway) and writing (exec producers/creators Rick Berman and Brannon Braga) are up to the highest standards of the ‘Trek’ adventures … The special effects are as nifty as anything from the other ‘Trek’ installments, and the sense of drama is heightened because the technologically ‘backward’ humans are outmatched from the get-go … Taking a note from the classic ‘Trek,’ Bakula and his crew are a highly passionate bunch, and the mood is essentially upbeat and gung-ho. No somber angst as in ‘Voyager.’ There's plenty of engaging verbal sniping as Archer and his chief engineer Charles ‘Trip’ Tucker III (Connor Trinneer) wrangle with T'Pol … Given the entertaining, engaging premiere, ‘Enterprise’ looks like it ought to have a good, long run and, eventually, a successful syndication deal.”

What does Variety say?

“Exec producers Rick Berman and Brannon Braga continue to fulfill ‘Star Trek’ creator Gene Roddenberry's promise to take viewers where no one has gone before with this, the fifth incarnation of the profitable sci-fi franchise … the show not only gives its devoted fans what they love most and is personable and accessible.”

What does Entertainment Weekly say?

“EW GRADE: B+ ‘Enterprise’ gives the ‘Trek’ franchise a good, much-needed jolt. Its space-exploration technology is presented as both advanced and a work-in-progress; the tone of the series is set neither by sci-fi pie-in-the-sky fantasy nor by slavish adherence to ‘Star Trek’ mythology, but by Bakula's fine, easygoing yet tough demeanor as Capt. Jonathan Archer … Unlike some performers who've applied the Vulcan makeup, Blalock doesn't just let her pointy ears do the acting: She has a slyness running beneath her Vulcan glare that will probably stand her in good stead aboard the ‘Enterprise NX-01.’ … the rest of Bakula's crew, which includes fresh-faced Connor Trinneer as chief engineer and Dominic Keating as a snappy British lieutenant, seem like dandy adventure-buddies … Of course, this being a ‘Trek’ enterprise, the show also has its share of portentous, silly dialogue … Dialogue notwithstanding, this is the first ‘Trek’ spin-off I can imagine appealing to both Trekkies and nonfans of this pop-cultural institution. I won't say ‘Beam me up’ because, thankfully, the ‘Enterprise’ folks don't utter that clichÃ© themselves; instead, I say ‘Count me in.’”

What does USA Today say?

It gives “Enterprise” three stars (out of four). “The folks who run the Star Trek empire are wisely sending the Enterprise back to the series' roots — both in time and in tone … A prequel set a century before the days of Captain Kirk, Enterprise recaptures the first Trek's sense of awe and adventure, along with its earnest faith in man's ability to create a better world. Plus, as a bonus, tonight's two-hour premiere is simply more entertaining than anything Voyager's fun-free wanderers ever offered … Unless you're a devoted Trek fan, odds are you won't get every in-joke and foreshadowing allusion. But even the uninitiated can enjoy Enterprise on its own terms as an involving space opera with a strong cast, a welcome sense of humor and a renewed sense of wonder. Come aboard."

What does The Los Angeles Times say?

“Trekkies either will raise the bar impossibly high for this series or watch it because they watch everything with this brand. Speaking as a viewer outside that category, this two-hour premiere is mildly entertaining, but mostly plays rather tepidly, its occasional glints of intellect pushed far into the background by action.”

What does The Arizona Republic say?

"This series looks like it will be far more fun and invigorating than the recently departed 'Star Trek: Voyager.' … 'Enterprise's' two-hour premiere … has plenty of other action, a heaping helping of special effects, some clever banter and the usual bits and pieces of techno-gibberish. It all comes together in impressive fashion, with Bakula primed and ready to take command and keep the faith. 'I hope nobody's in a big hurry to get home,' he says in the closing minute. Say no more."

Herc, is it true Jolene Blalock, who plays the Vulcan hottie T’Pol, is a stiff in the acting department?

Blalock steals the show! The tiny actress brings unexpected authority and gravity to the expedition, and is especially good at disparaging her shipmates’ occasional lack of grace under pressure. Like Spock, she’s perfectly fearless, and never less than amusing as she endeavors to dial down her disdain for too-human crewmates.

One revelation in the “Enterprise” pilot is the Vulcans, less than 100 years before Kirk’s time, still hadn’t quite nailed down the whole free-of-emotions thing. One Vulcan official gets so pissed early on that he actually raises his voice. (This isn’t necessarily a breach of continuity; it was established in that Ice Age episode with Mariette Hartley that Vulcans started out as a pretty savage lot.)

Is T’Pol the only compelling female aboard?

No. The first time we meet Hoshi Sato, she’s giving a linguistics lecture in shorts and a halter top. The character of nervous communications officer Hoshi was big fun on paper, but I liked her even better in person. Oh, and despite the exotic name, and despite the fact that we first meet her in South America, I’d guess from the accent that she hails from somewhere near Los Angeles’ San Fernando Valley.

How’s the rest of the supporting cast?

Good beyond all expectations. The southern guy, the black guy, the English guy, the alien guy; none give the ick. It is, in fact, likely the best Trek crew ever; you’ll be hard-pressed to find a Neelix or LaForge among them. (When I first saw the Neelixy Dr. Phlox make-up, I took an immediate dislike to the character; but on screen he’s possessed of efficient charisma, and seems to embody a lot of the Voyager doctor’s more entertaining qualities.) If one has to find the weakest link among the regular cast, it’s probably Bakula -- he’s exactly the same generically likeable TV guy we all remember: neither offensive nor particularly compelling. You’ll find no suprises in the way he approaches his role.

Is Phlox’s smile as described in Herc'sspoiler-happy July 4 review of the pilot script?

Is the crew’s mode of transport worthy of the franchise?

One couldn’t hope for a better-looking starship. Enterprise NX-01 owes as much to the Millenium Falcon as it does to NCC-1701; it’s brassy and sleek, but there’s also a dirty, utilitarian feeling to her, inside and out. A cool toy to be certain.

Did James Cromwell’s cameo come off?

It did, and brilliantly. One has to admire the very smooth and offhanded way Zefram Cochrane’s appearance is handled: there’s not even a close-up of Cromwell’s wizened visage; mostly, we’re just presented Cochrane’s voice delivering his famous lines as the crew is depicted taking its positions aboard ship.

There are! The line “That never happened before” was particularly yelp-worthy.

Really, really different! Forget the spacescapes that have dominated the title sequences of every prior trek. Even if one discounts the (rather undistinguished) song Rod Stewart is singing, it’s clear that the producers have taken pains to demonstrate that they are not going through the motions this time.

They’re not going through the motions?

Clearly, an extraordinary amount of love and attention went into this endeavor, from the propulsive teleplay to the careful casting to the world-beating production design. One gets the definite impression the producers knew how much was at stake this time around, and all the best feet are put forward. (Remember that the last time a new Trek series was born, producers were simultaneously winding down “The Next Generation,” gearing up “Generations” and soldiering on with “Deep Space Nine.” It’s fair to guess that considerably more devotion attended the birth of “Enterprise.”)

Wait. What does the title sequence actually depict?

There are ancient maps, and terrestrial exploration vessels, and 20th century astronauts, and a shot of Cochrane’s first warp flight from “First Contact.” It’s all very elegant and complex.

Are all the Klingons bumpy?

They are, as one supposes Roddenberry would have liked it. And during warp flight, the stars fly by as they do in “The Next Generation” – not the way they do in the original series. These are things we’re just going to have to get over.

If you want to see the love embedded in this series, take a close look at those shots of FutureGuy. Somebody labored long and hard to make sure our extended glimpses kept us guessing. The temporal vapors and shadows actually seem to morph Futureguy: wait, he’s Vulcan! No, human! No, Cardassian! No, some freaky skull-headed alien! Ew!

Does the crew use flip-phone communicators?

Is there no downside to the “Enterprise” pilot?

As with so many action features, the final act contains much running about advancing behavior, some of it confusing and a bit tedious. But the show finishes in style, with a visit to a very different-looking Klingon homeworld.

Most of us own the wrong-shaped TV sets! Like “ER,” “Angel” and “The Sopranos,” “Enterprise” is presented in letterbox!